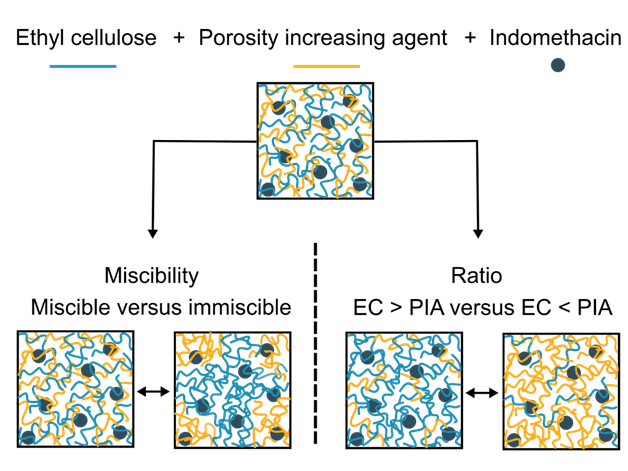 EC is a well-known polymer in the pharmaceutical industry for coating applications, but often requires an additional component to increase its porosity [3]. Next to that, little is known on how altering the porosity of an insoluble carrier system can affect the drug release from an ASD. Hence an additional water-soluble polymer, defined as a porosity increasing agent (PIA), was included in the EC-based ASDs. Whether or not a PIA is miscible with EC can affect the porosity of the formulation upon contact with water and therefore also the drug release (Figure 1). In the case of a miscible system, drug molecules will be distributed in a homogeneous polymer network of PIA and EC while in the case an immiscible system, discrete regions of PIA will be formed. For this reason, assessment of the miscibility of various PIA with EC was considered as a crucial part for this study, prior to the formulation of ternary ASDs. For the ternary ASDs, various ratios of EC/PIA were prepared to assess if there was an optimum in the composition of the polymer blend for the drug release (Figure 1).

Miscibility study of EC and PIA

Modulated differential scanning calorimetry (mDSC) was used to investigate the miscibility of the following PIA with EC: hydroxypropyl cellulose (HPC), polyvinylpyrrolidone /vinyl acetate (PVP/VA), polyvinylpyrrolidone (PVP) K12 and PVP K25 (Figure 2). For the first three systems, it was difficult to draw any conclusions with mDSC since HPC displayed no glass transition temperature (Tg) and the Tgs of pure EC, PVP/VA and PVP K12 were located so close to each other, that it was difficult to distinguish if the polymer blends demonstrated one or two Tgs. EC/PVP K25 showed two Tgs for the blends of 5 to 50% PVP K25 and this partial miscibility was also previously described in literature by Dereymaker et al [4]. However, caution is needed with this interpretation since EC also displayed an endothermic event around the Tg of PVP K25. 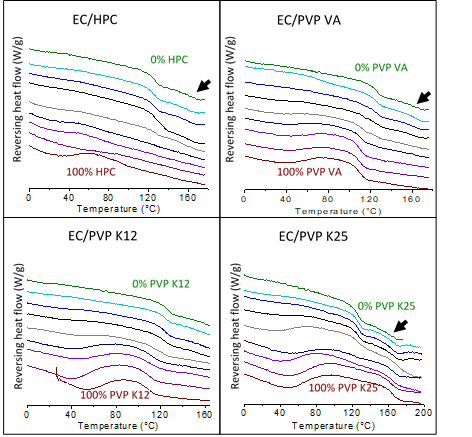 Solid state of binary and ternary ASDs with EC

After the miscibility study, binary and ternary ASDs were prepared via spray drying with indomethacin (IND) as a model drug and PVP K12 or K25 as a PIA. The drug loading was set at 30% (m%) for all formulations while the ratio of EC/PVP was varied from 0/100 to 100/0 (m/m). All ASDs had a single Tg, meaning that a miscible system was obtained based on mDSC. The IND/EC/PVP K12 ASDs demonstrated an exothermic event in all nine formulations (Figure 3). For the formulations with a high EC/PVP ratio, this exothermic event can be attributed to cold crystallization of EC since it was also observed in pure EC. However, the formulations which consisted of a higher amount of PVP K12 or only consisted of PVP K12 as a carrier showed an exothermic event as well at a higer temperature. This observation was considered to be peculiar since PVP K12 is not a semicrystalline polymer [5] and to our knowledge does not form ordered regions upon heating. The investigation of the phase behavior of these ternary ASDs is still ongoing and remains one of the major challenges of this research. Nevertheless, it is clear that when working with ternary ASDs, the elucidation of the phase behavior becomes more complex compared to binary systems.

The formation of a porous network after the release of PVP was confirmed for both PIA with scanning electron microscopy (SEM) (Figure 4). After the investigation of the porous network, drug release was monitored for both binary and ternary ASDs in acidic medium which was adjusted to a neutral pH after one hour (Figure 5). When the ratio of EC/PVP K12 (m/m) was decreased from 100/0 to 80/20, the release of IND improved greatly. However, when the ratio was further decreased towards 20/80, drug release was significantly reduced and performed even worse than both binary ASDs. This phenomenon was not expected as our hypothesis was that more water-soluble PVP would create more free space for the drug to diffuse through and therefore lead to a better drug release. A possible explanation for this trend is the occurrence of an interaction between EC and PVP, but this is currently still under investigation. A similar trend was observed for the ternary systems with PVP K25. In addition to that, ASDs with EC/PVP K25 (m/m) ratios between 95/5 and 80/20 showed a slower release compared to the EC/PVP K12 systems with the same ratio. The opposite observation was done for EC/PVP K25 ASDs with ratios between 80/20 and 5/95. For those formulations the drug release was also limited, but not to the same extent as for the ASDs of EC/PVP K12.

The use of EC as a hydrophobic insoluble carrier in combination with a PIA seems to be a promising strategy for the formulation of ASDs with a delayed yet sufficient drug release as demonstrated by the SEM images and release results. However, some challenges were faced with the miscibility study and the analysis of the solid state behavior. First of all, mDSC appeared to be insufficient as stand-alone technique to investigate the miscibility. Next to that, working with a ternary ASD system makes the elucidation of the phase behavior more complex compared to a binary system. Finally, it is clear that by adjusting the PIA and the ratio of EC/PIA drug release can easily be altered, but the factors that influence the release mechanism next to diffusion such as a possible interaction between EC and PIA, distribution of the pores, wettability and local viscosity created by the release of the PIA, are not yet fully understood.

Read 2975 times
More in this category: « Development of a surface coating technique with predictive value for bead coating in the manufacturing of amorphous solid dispersions Continuous twin screw granulation: Impact of binder addition method and surfactants on granulation of a high-dosed, poorly soluble API »
back to top