First, the low crystallization tendency of the model drug in MeOH was evaluated by means of spray drying and subsequent modulated differential scanning calorimetry (mDSC) analysis. With respect to the classification of Van Eerdenbrugh et al., it can be concluded that MIC also exhibits a low crystallization tendency in MeOH [1]. It was however striking that the obtained melting point onsets did not correspond to the melting point onsets of any known MIC polymorph [2]. Our data suggest the formation of a MIC solvate and further investigations, encompassing the implementation of single crystal analysis, are currently ongoing. In a next step, a drug loading screening was performed on casted films and coated beads in order to define the highest possible MIC loading that still results in a one-phase amorphous system (see Figure 1). For the film casted MIC-PVP-VA formulations, 30% was determined as the highest possible drug loading that still results in a one-phase amorphous system. In contrast, for MIC-PVP-VA formulations coated on beads, even 50% drug loading resulted in the formation of one-phase amorphous systems. These results thus indicate that film casting, which is often used as a screening test to assess drug-polymer miscibility, is not suitable for phase behavior predictions of ASDs coated on beads, most likely because of the low rate of solvent evaporation.

Therefore, it was examined whether and how a surface coating technique can be developed that can predict the phase behavior of MIC-PVP-VA ASDs coated on beads. For this purpose, the drying chamber of the spray dryer was flattened at the bottom so that a glass cylinder could be inserted. This cylinder serves as supporting plate for an MCC tablet, which is prepared by milling MCC beads, a subsequent sieving step and compression of the resulting MCC powder. The dimensions of the cylinder were chosen in such a way that the setup still allows for sufficient air flow for the simultaneous production of spray dried powder that can be collected in the collection vessel (see Figure 2). The operational conditions were related as closely as possible to the parameter settings of the bead coating process. 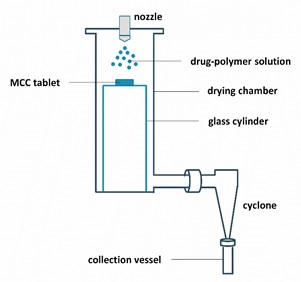 Finally, spray drying was also evaluated for its ability to manufacture high drug-loaded ASDs. The highest possible drug loadings that still result in a one-phase amorphous system were obtained for bead coating and its predictive intermittent surface coating technique, followed by spray drying and finally by film casting and the continuous surface coating technique, thereby underlining the importance for further research into the underexplored bead coating process.

Read 4337 times
More in this category: « Stabilization of amorphous drugs; are crystalline inorganic excipients a way forward? Investigating the complex phase behavior and drug release of ternary solid dispersions based on ethyl cellulose »
back to top