Single droplet drying and particle formation during spray drying are difficult to investigate, because of the complex two-phase flow in spray dryers and other difficulties [1]. A technique to investigate single droplet drying is acoustic levitation, where single droplets can be placed close to the pressure nodes of a standing acoustic wave. The first drying stage is known as the constant-rate period, since the surface of the droplet decreases at a constant rate due to evaporation of the liquid from the surface. This drying stage therefore follows the so-called d2 law [2]. Suspension droplets exhibit this behavior as long as the surface is wetted [3]. At high ratios of droplet-shrinkage-rate-to-diffusivity in the liquid phase, a non-uniform radial distribution of the solid may arise, leading to crust formation [4]. The local porosity of the solid, surface roughness and solids distribution inside the microsphere may result in a highly complex evolution of the second drying stage [4].

In the present work we studied the evaporation kinetics of suspension droplets, with solids dissolved in various carrier liquids, and the resulting microsphere morphology of pharmaceutical excipients. Furthermore, the mechanical properties of individual microspheres were evaluated by hardness measurements and related to the solid’s solubility in the liquid. Knowing the influencing factors during spray drying of suspensions will make it possible to choose process parameters during drying which avoid change of particle properties.

Lactose GranuLac® 230 (Molkerei Meggle, Wasserburg, Germany) was used as solid substance, and water of analytical grade (Ultrapure water system TKA, Niederelbert, Germany) and isopropanol in high purity ≥ 99.8 % (Carl Roth, Karlsruhe, Germany) as liquid mixture to form the suspension. The ratio of water-isopropanol was varied according to the solubility curve in Figure 1, resulting in different amounts of dissolved lactose. Lactose exhibits a high solubility in water and a low solubility in isopropanol. The following definitions were chosen, i.e., the mass of the liquid mixture mliq consisting of H2O and solvent I (isopropanol) in Eq. 1, the water mass fractionwH2O in Eq. 2 and the solubility of lactose XL in Eq. 3 with md as the mass of the dissolved excipient (alpha-lactose monohydrate). 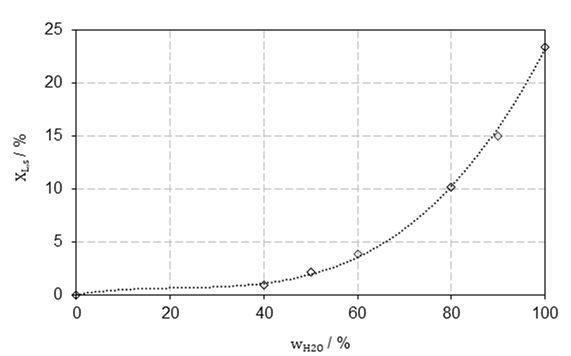 An acoustic levitator was used to assess the drying kinetics of lactose suspensions with different lactose mass fractions and solvent compositions. This technique enables drying without contact between the levitated object and a solid body, and therefore heat and mass transfer are influenced only from the acoustic streaming which can be controlled by additional air streams around the object. The levitation setup used can be seen in Figure 2, consisting of a transducer and reflector to generate the acoustic sound wave for droplet positioning, and a macro lens with a light source to record the drying progression. 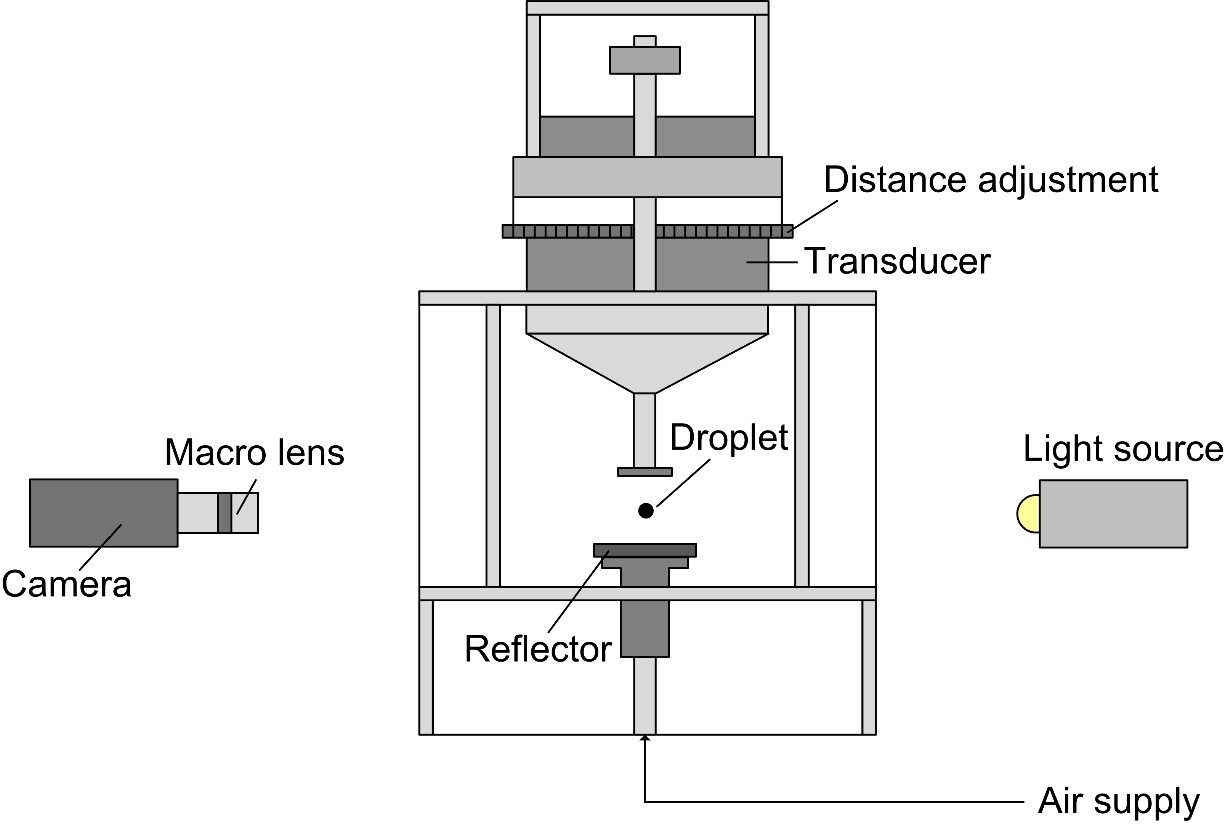 The composition of a droplet with the mass m consists of the dissolved mass md and the suspended mass ms of the solid material in a mixture of the liquid masses mH2O and mI of water and isopropanol. Depending on the water mass fraction wH2O (Eq. 2), different mass of solids msolid (Eq. 4) were present in one suspension droplet. The solids mass msolid consists of dissolved md and suspended solids ms. 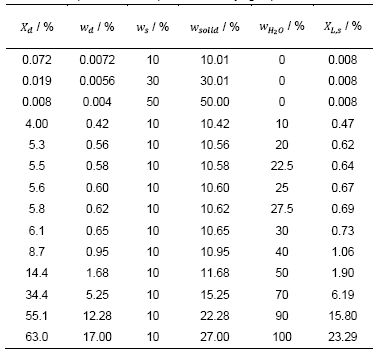 The hardness of individual microspheres was measured with the side-crushing-strength (SCS) test in a slightly modified version. The procedure for this test method is described in ASTM Standard D4179-01 for crushing of single catalyst pellets [5]. The agglomeration strength of individual dried microspheres was measured using a rheometer MCR 300 from Anton Paar (Graz, Austria) in the plate-plate configuration. For this measurement, individual microspheres dried in the acoustic levitator were placed in the center of the bottom plate, and the upper plate was moved downward at the constant velocity of 5 x 10‑6 ms-1 (see Figure 3). The normal forces were recorded while the upper plate was moving.

Figure 3. Microsphere on the rheometer plate (a) before and (b) after hardness test. 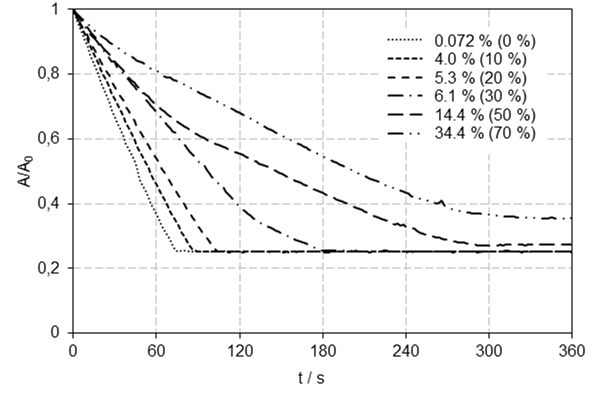 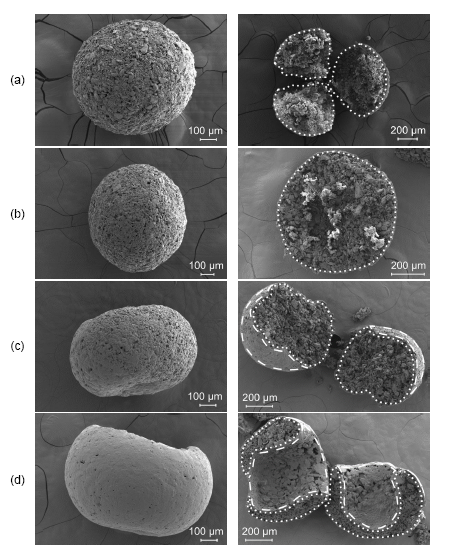 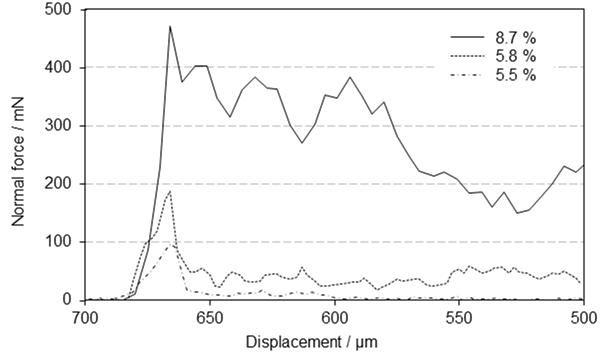 Figure 6. Normal force on individual microspheres dried in the acoustic levitator as a function of plate distance. The normal force is applied and recorded by a rheometer. The suspended lactose mass fraction ws was 10 %. The dissolved lactose mass loading Xd varied between 5.5 % and 8.7 %.

Based on these data, by extrapolation the point was calculated where no force is needed to break the microsphere. This point reflects a suspension composition with a dissolved lactose mass loading Xd of 5.2 % or, equivalently, a water mass fraction wH2O of 19 %. This corresponds to our observation that quite loose microspheres are formed below these values. These results demonstrate the strong influence of the suspension composition on the mechanical strength of spray-dried particles. There exists a threshold value of the dissolved lactose loading Xd below which loose microspheres are formed. Primary particles are then loosely bonded by precipitated solids, so that the microspheres easily break up, even by weak forces.

Figure 7. The breaking force as a function of (a) the dissolved lactose mass loading Xd and (b) the water mass fraction wH2O.

The present work investigates the influence of initial suspension droplet composition on the drying kinetics via acoustic levitation and the resulting microsphere properties in relation to spray drying. It is found that the dissolved lactose mass loading Xd determines the drying kinetics and has a strong influence on the dried microsphere morphology and mechanical strength. The individual microsphere structure changes from loosely packed primary particles with isopropanol as the solvent to denser packing with increasing water mass fractionwH2O. The dissolved solids precipitate during drying and bond the primary particles. The hardness of individual microspheres was measured by a compression strength test. Loosely agglomerated microspheres were formed below the threshold Xd = 5.2 % for the investigated model substance. Based on these findings, drying should be carried out below this threshold to enable drying either of primary particles (i.e. tailored particle properties after crystallization remain unaltered during drying), or above this threshold to produce larger, agglomerated particles (i.e. improved powder flowability as favored in direct compression).

Read 15034 times
More in this category: « Novel stand-alone test tool for scientific qualification of a dosator capsule filling process Cryomilling as manufacturing technique to produce ASDs, a technique as gentle as generally assumed or rather not? »
back to top