The multi-particle finite element method (MPFEM) is used to model the yield strength of compacted powder. This approach considers discrete particles by treating each single particle with FEM. The meshed particles may deform according to some elasto-plastic material law and interact with each other via contact mechanics [1–3]. The disadvantage of this method are the very high computational costs, and therefore in this work only a small representative volume element RVE with a certain number of particles is considered (see Figure 1 left). Periodic boundary conditions are used to avoid boundary effects. This “micromechanical” model is used to determine yield surfaces of the powder, which are comparable to well-known Drucker-Prager/Cap model (see Figure 1 right). During the parameter study the relative density of the powder after compaction and the cohesion strength of the particle contacts is varied. The details of the model can be found in [4].

Figure 1: The RVE of deformable particles (left) is used to determine yield surfaces similar to the Drucker-Prager/Cap model (right)

Figure 2 presents the numerically obtained yield surfaces for different relative densities with a constant cohesion strength (filled points). As expected, the size of the yield surfaces increases with increasing relative density, while the shape remains approximately constant. The solid lines are least-square error fits of Eq. 1 to the discrete data points. The equation uses five fitting constants (a, pm, r, j, t, k) to describe different sizes and shapes of the yield surface. As can be seen in the figure, a very good fit is achieved.

Figure 2: Yield surfaces of compacted powder for different relative density after compaction and a constant contact cohesion strength of 100 MPa

Figure 3 depicts the numerically modeled yield surfaces as a function of the cohesion strength with a constant relative density of 0.85. An interesting behavior can be observed here: Low cohesion strengths cause yield surfaces that match the shape of the Drucker-Prager/Cap model. In contrast, high cohesion strengths result in an elliptical shape. The ellipse is remarkably similar to the isotropic constitutive model for the plastic behavior of metallic foams developed by [5]. The center of the ellipse is close to a pressure of zero, which requires the isostatic compressive strength to be equal to the isostatic tensile strength. Such a behavior can be explained by practically bonded particles. The high contact cohesion inhibits contact sliding and particle rearrangement and therfore the plastic yielding of the particles is mainly responsible for the deformation of the powder, which renders the powder’s behavior similar to a foam or porous material. The solid lines are again least-square error fits of Eq. 1 to the discrete data points. 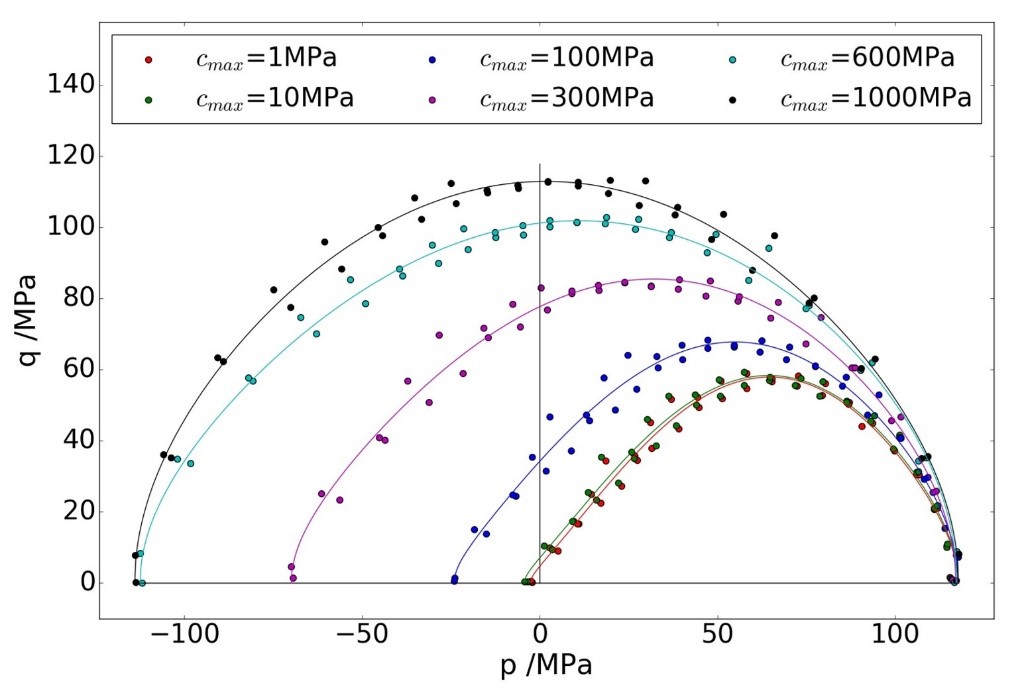 This work introduces an efficient RVE for the compaction simulation of a monodisperse powder with the MPFEM. In contrast to earlier studies cohesion is considered in the particles’ contact, which allows to describe tensile strength after compaction. The present work shows the influence of different cohesion strengths on the yield surface of compacted powder. The model allows to run multiple parameter studies. Hence it is possible to determine yield surfaces as a function of the compact density and the cohesion strength.

Although the existing work demonstrates the possibilities of MPFEM for compaction simulations there are further steps necessary to fully exploit the possibilities of this method in the future. Non-ideal conditions of real particles (non-spherical and polydisperse particles, etc.) have to be taken into account to describe real powders. The deformation behavior of the particle material (elastic, plastic and fracture) as well as the real contact interactions between particles have to be modelled sufficiently to obtain numerical results which can be compared to real experiments. Next, different compaction modes could be considered in future work since only isostatic compaction was considered in this work. Especially closed-die compaction should be considered, since it is representative for many industrial compaction processes as for example tableting.