Initially, PLGA microparticles loaded with ketoprofen were prepared using O/W emulsion extraction / evaporation solvent method while keeping the other parameters constant for different formulations. The only parameter which was varied is the viscosity of the organic phase. The aim is to get a range of microparticles having the same size. The obtained microparticles were thoroughly characterized using several techniques such as GPC, DSC and X-ray powder diffraction. The in vitro drug release studies were performed in phosphate buffer pH 7.4 (containing 0.02 % Tween 80) at 37 ° C with horizontal shaking. At predetermined time intervals, samples were withdrawn, replaced with fresh medium and analyzed by appropriate method. Swelling studies were monitored in 96-well standard microplates in the same conditions as the release studies.

The obtained results showed that the encapsulation efficiency of the investigated ketoprofen-loaded microparticles substantially increased (from 50 to 90%) when increasing the theoretical drug content from 1 to 50 %. The release studies showed two types of release profiles as it can be seen in Figure 1. 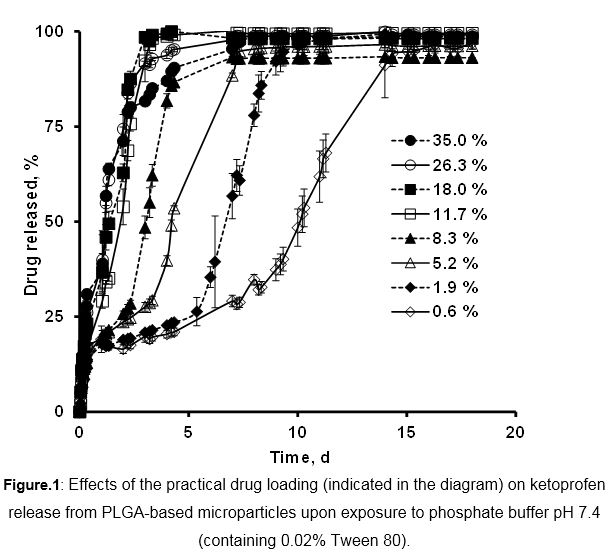 At low drug loadings, tri-phasic drug release patterns were observed: After an initial rapid release phase (“burst release”), a release period with a more or less constant drug release rate was observed, followed by a third (and again rapid) drug release phase. With increasing drug loadings the onset of this third release phase was shifted to earlier time points. At high drug loadings, it was difficult to clearly distinguish different drug release phases; the profiles were more or less bi- or mono-phasic. To better understand why these pronounced differences in the drug release patterns were observed and in order to elucidate the underlying mass transport mechanisms controlling ketoprofen release from these PLGA microparticles, the latter were thoroughly characterized before and after exposure to the release medium. The X-ray powder diffraction patterns of the PLGA, ketoprofen and the different types of drug loaded PLGA microparticles were performed before exposure to the release medium. Clearly, the ketoprofen powder as received was highly crystalline, whereas neither the PLGA powder (as received), nor any of the ketoprofen-loaded PLGA microparticles showed X-ray diffraction peaks indicating crystallinity. This means that the ketoprofen, which was dissolved in the organic phase during microparticle preparation, did not re-crystallize upon solvent evaporation, but was probably molecularly dispersed in the PLGA matrix (dissolved) and optionally partially precipitated in an amorphous form within the system (depending on the practical drug loading). DSC measurements with dry, ketoprofen-loaded microparticles confirmed this hypothesis: The pure ketoprofen powder (as received) showed a sharp melting peak at about 95 °C, whereas none of the investigated ketoprofen-loaded PLGA microparticles showed any thermal event in this temperature range. This is also in good agreement with data reported by Ricci et al. [2]. Furthermore, the DSC studies revealed that ketoprofen is an efficient plasticizer for PLGA. Figure 2 shows how the glass transition temperature (Tg) of the polymer significantly decreased upon addition of up to around 25% ketoprofen. Blasi et al. attributed these plasticizing effects to hydrogen bonding [3].

Figure 3 illustrates the impact of the initial practical ketoprofen loading on PLGA degradation in the investigated microparticles upon exposure to the release medium. As it can be seen, the polymer degradation rate substantially increased with increasing initial drug content. This can be attributed to the fact that ketoprofen is an acid and PLGA degradation is catalyzed by protons [4]. Importantly, the polymer molecular weight can be expected to be potentially decisive for key properties of the microparticles, such as their mechanical stability and swelling behavior.

Swelling kinetics of individual microparticles and correlation with drug release

The microscopic pictures in Figure 4 show ensembles of microparticles, which were exposed to phosphate buffer pH 7.4 (containing 0.02% Tween 80) at 37 °C for 7, 10 and 14 d, respectively. Importantly, the spatial arrangements of the microparticles in the wells remained about constant, so that it was possible to follow the changes in the size of individual microparticles during the entire drug release period.

The presented results suggest that the swelling kinetics of PLGA microparticles can play a decisive role in the control of drug release: The onset of the often observed third (and again rapid) drug release phase form these systems might be a consequence of the penetration of substantial amounts of water into the particles, leading to a fundamental increase in drug mobility. During the second drug release phase, the polymer chain entanglement is too high to allow for significant particle swelling and, thus, results in limited water contents and limited drug mobility, resulting in a relatively low drug release rate.