Co-amorphous drug formulations have been found to be a promising alternative to common solid dispersions. Through this approach, the drug can be stabilized in its amorphous form by interactions with a low molecular weight compound, e.g. another drug or an amino acid [1, 2]. Recent studies have shown the feasibility of spray drying as a technique to manufacture co-amorphous drug-amino acid combinations [3]. In the next step, the further processing to a final solid dosage form is of interest.

The aim of this study was to develop an appropriate tablet formulation for spray dried co-amorphous indomethacin-arginine (SD IND-ARG) (see full article). Since compression during tableting poses a crystallization risk, solid-state properties were carefully investigated after tableting with various compaction pressures and after long-term storage. Furthermore, the non-sink dissolution behaviour of tablets with SD IND-ARG (TAB SD IND-ARG) was evaluated in order to assess a possible solubility enhancement. The dissolution profiles were compared to tablets containing a physical mixture of crystalline IND and ARG (TAB PM IND-ARG).

The composition of the tablet formulation for TAB SD IND-ARG and TAB PM IND-ARG is detailed in Table 1. The formulation contained 50 mg IND (according to 74.4 mg SD IND-ARG), mannitol as filler, croscarmellose sodium as superdisintegrant, colloidal silicon dioxide as glidant and magnesium stearate as lubricant. This formulation allowed for the preparation of intact tablets with SD IND-ARG over a broad range of compaction pressures from 42 to 360 MPa. The porosities varied from 29 to 6 %, whereas the tensile strength increased accordingly from 0.8 to 4.5 MPa. All tablets showed an acceptable disintegration time from 4 to 6 min. The requirements of uniformity of dosage units (Ph.Eur. 2.9.40) were also met with a content of 99 ± 2 % and an acceptance value of 5.2.

The solid-state properties of tablets were investigated by modulated DSC, XRPD and ATR-FT-IR immediately after compaction. Results were compared to those of SD IND-ARG and uncompressed tableting mixtures with SD IND-ARG or PM IND-ARG.

With modulated DSC measurements, a single glass transition temperature was detected between 111 °C and 117 °C for all tablets. This is in agreement with SD IND-ARG powder, which exhibited a glass transition at 114 ± 1 °C [3]. The XRPD pattern (Figure 1A) of the tableting mixtures or tablets, respectively, mainly showed peaks of the filler mannitol. Therefore, characteristic peaks of crystalline IND were selected in order to assess a possible crystallization of amorphous IND from the co-amorphous formulation. Compared to the tableting mixture with PM IND-ARG, there was no evidence of characteristic IND peaks neither in the diffractogram of the tableting mixture with SD IND-ARG nor in diffractograms of the tablets. These results were also obtained after storage for 10 months at 23 °C or 40 °C over silica gel. 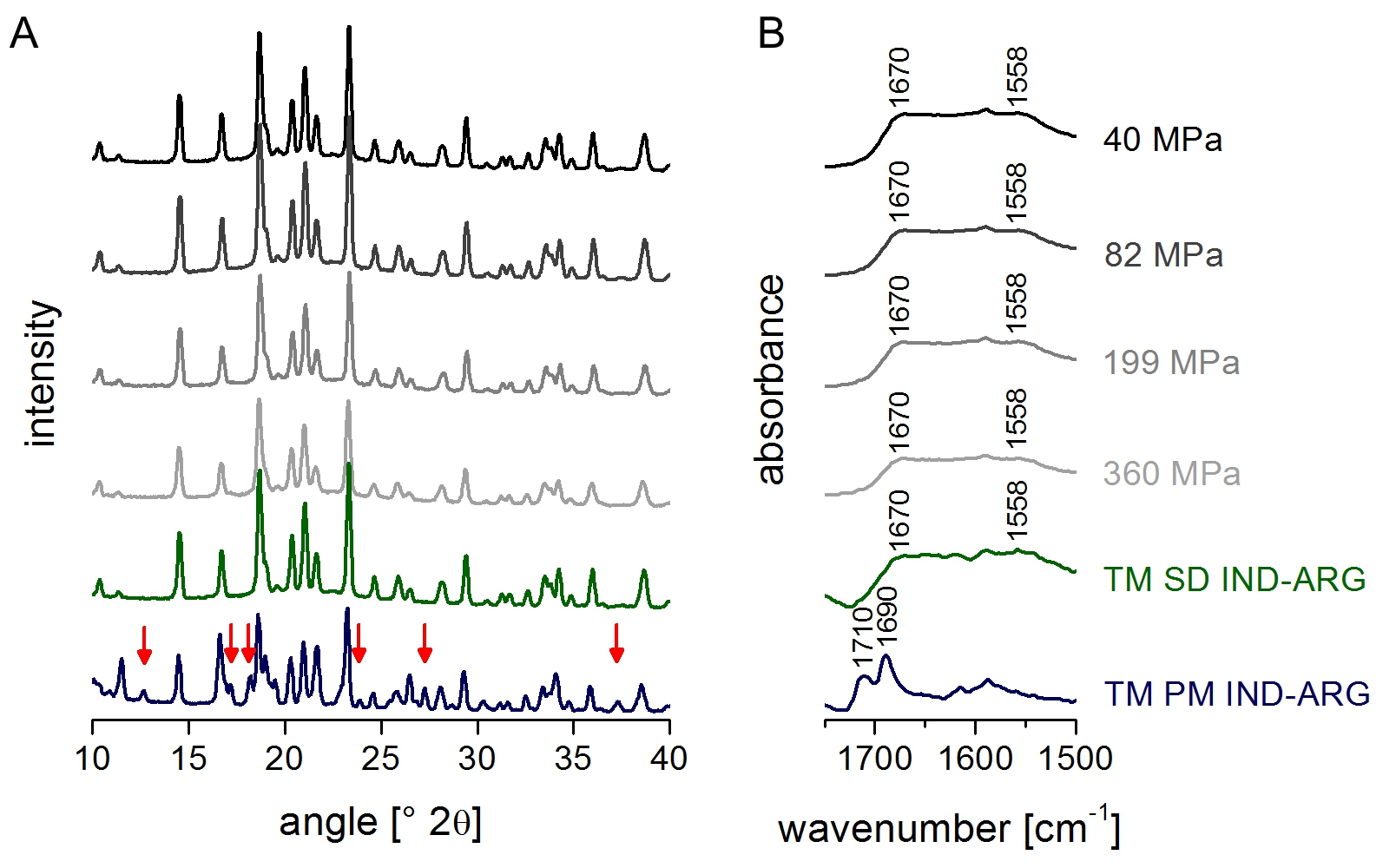 Additionally, the specific interactions between drug and amino acid were investigated by ATR-FT-IR (Figure 1B) since they are an essential measure of physical stability. Characteristic for co-amorphous IND-ARG is the formation of ionic interactions, resulting in the disappearance of the peaks at 1690 cm-1 and 1710 cm-1 in the carbonyl stretching region and the appearance of a peak at 1558 cm-1. The latter is related to the stretching vibrations of the COO- group. The spectra of all tablets were comparable to those of SD IND-ARG and the tableting mixture with SD IND-ARG; which indicates that the molecular interactions were not influenced during tableting. Overall, the solid-state characterization of tablets demonstrated the high physical stability of co-amorphous IND-ARG within the tablets and during long-term storage.

The dissolution profile of TAB SD IND-ARG is depicted in Figure 2A compared to the profile of SD IND-ARG powder and TAB PM IND-ARG. The results are exemplary shown for tablets pressed with 82 MPa, since the dissolution behaviour was only hardly affected by using different compaction pressures during tablet manufacturing. 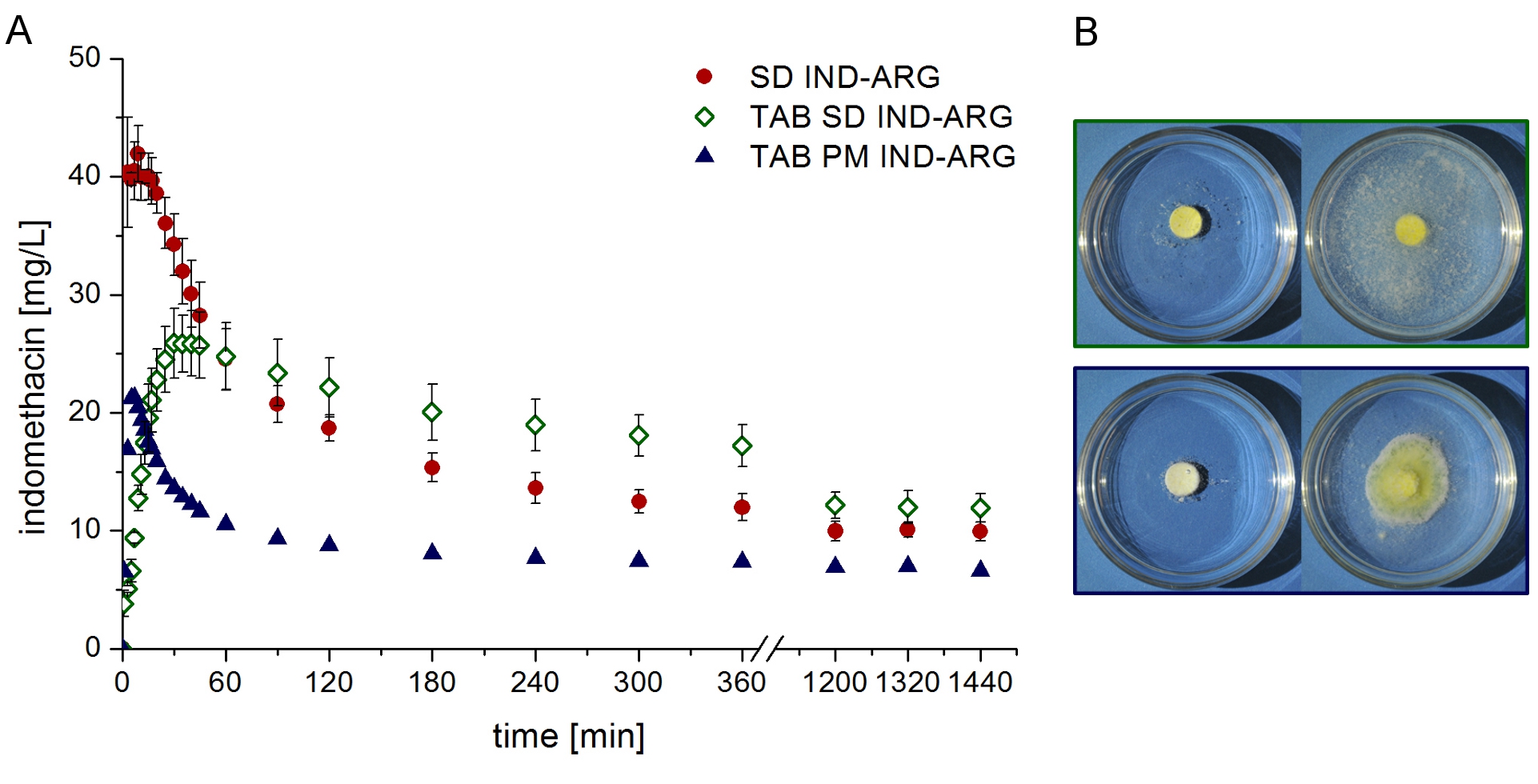 The SD IND-ARG powder showed an immediate drug release resulting in a supersaturation by a factor of about 7 (solubility of IND in the dissolution medium: 6.4 mg/L), which was followed by a fast crystallization. In comparison, the drug release from TAB SD IND-ARG was slower due to the reduced surface area of tablets and due to a slow erosion of the tablets. Although the extent of supersaturation was decreased to a factor of about 4, the area under the curve was comparable to SD IND-ARG, because the supersaturation was maintained for a longer period.

Regarding TAB PM IND-ARG, tablets turned yellow directly after contact with the dissolution medium, indicating an in situ amorphization of IND in presence of ARG (Figure 2B). This resulted in a supersaturation, too, whose extent was comparable to TAB SD IND-ARG but which was obtained faster due to the shorter disintegration time of the tablets. A faster crystallization of IND resulted in half the area under the curve.

Interestingly, the plateaus obtained for SD IND-ARG and TAB SD IND-ARG after 24 h dissolution testing were not in accordance with the solubility. This could be explained by the formation of different polymorphic forms of IND.

To identify the obtained polymorphs, precipitates were investigated by XRPD, DSC and SEM (Figure 3). As expected, diffractograms and thermograms of the precipitates of TAB PM IND-ARG revealed the occurrence of the stable γ-IND. Additionally, SEM images showed the typical prism- and plate-like crystals of the γ-form. This indicates that the in situ amorphization was probably not completely throughout the tablet and, thus, γ nuclei were available resulting in further growth of this polymorph. 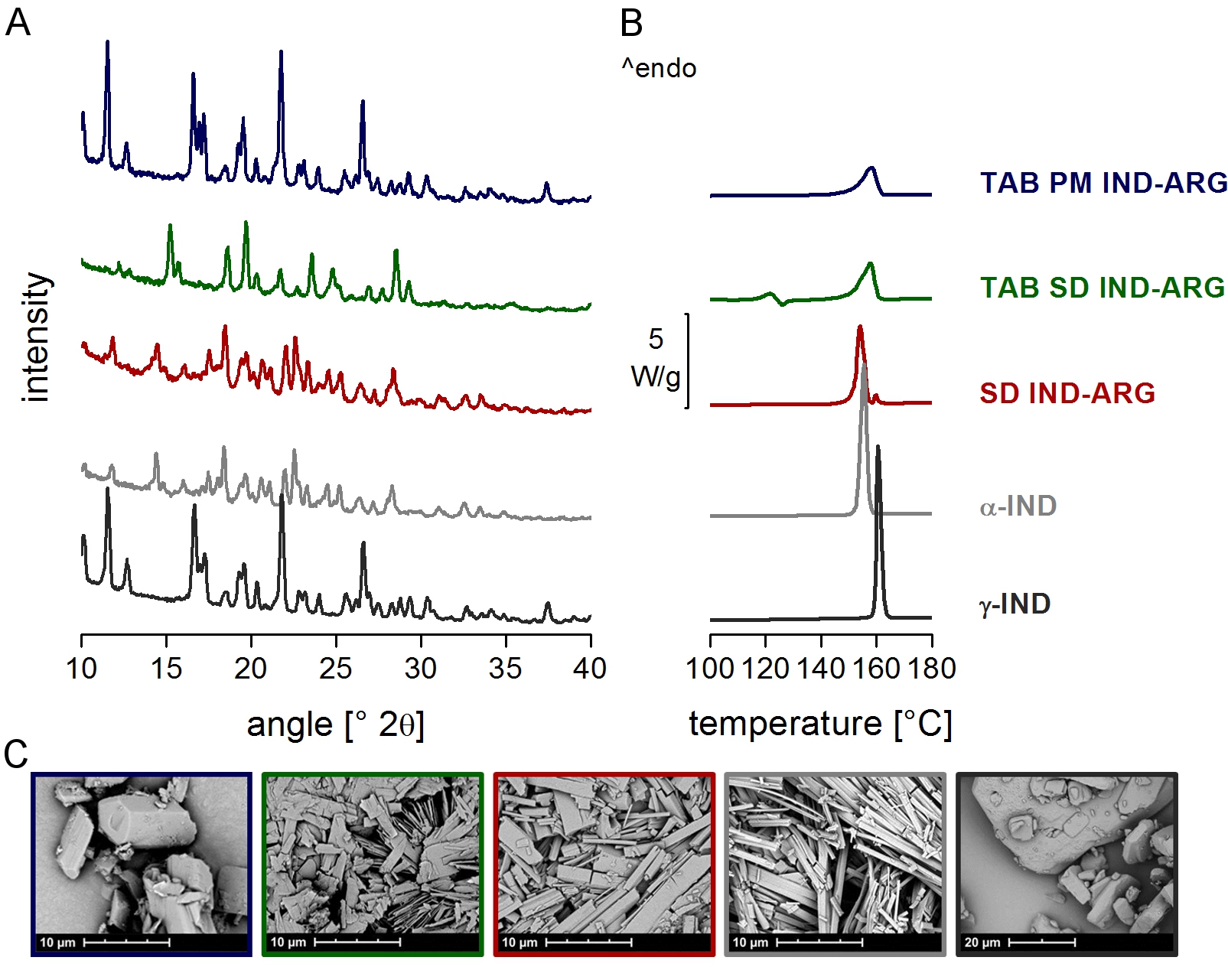 Figure 3: (A) X-ray diffractograms, (B) DSC thermograms and (C) SEM images of the precipitates obtained after 24 h non-sink dissolution of TAB PM IND-ARG, TAB SD IND-ARG or SD IND-ARG, in comparison to α-IND and γ-IND.

Since comparable plateaus were reached during dissolution of SD IND-ARG and TAB SD IND-ARG, the formation of the same modification was expected. The SEM images exhibited needle-shaped crystals for both precipitates, whereas XRPD and DSC indicated the occurrence of different polymorphic forms. SD IND-ARG crystallized in the α-form, which is the most commonly observed metastable modification of IND. The diffractograms and thermograms of the precipitates of TAB SD IND-ARG could not be related to modifications reported in literature. DSC measurements showed that the obtained metastable form melts during simultaneous crystallization to the stable γ-form.

The appearance of different polymorphs obtained from co-amorphous IND-ARG can be explained by varying rates of crystallization, which are influenced by the concentration of dissolved drug. During dissolution of TAB SD IND-ARG, less IND per time was dissolved due to the reduced surface area compared to pure SD IND-ARG powder and due to the slow erosion of the tablet. The resulting lower supersaturation, which was maintained for a longer time, may facilitate the formation of a different polymorphic form.

For the first time, an appropriate solid dosage form was developed for a co-amorphous drug-amino acid formulation, demonstrating the high physical stability for the particular system during further processing to tablets and during long-term storage thereof. The dissolution behaviour of IND was enhanced by the co-amorphization with ARG as well as by formulating the co-amorphous form into tablets. Furthermore, IND was found to crystallize in different polymorphic forms from SD IND-ARG powder or from tablets therewith, which is due to different rates of crystallization.