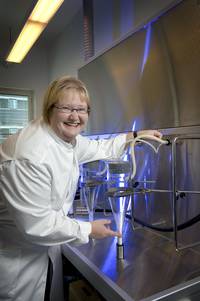 Prof. Anne M. Juppo holds the professorship in Industrial Pharmacy in University of Helsinki since 2006. Industrial pharmacy is a discipline which includes manufacturing, development, marketing and distribution of drug products including quality assurance of these activities. Her research at the University of Helsinki is focused at the moment on the novel technologies (excipients and processes) for pharmaceutical solid formulation on biopharmaceuticals and solid formulations for veterinary, peadiatric and elderly patients.

Her previous appointments are in pharmaceutical industry: AstraZeneca R&D Mölndal (1996-2006), where she worked as research scientist, project leader, team manager and as Principal Scientist in Product Development. Her areas of interest in these positions were controlled release preparations, particle technology, pellet technology and polymer coatings. In addition to the industrial position she had an adjunct professorship (2003-2005) in University of Helsinki. Prior to her position at AstraZeneca, she worked with solid state and particle characterisation in Orion Pharma, Finland (1992-1995).