Physical instability arguably is the major challenge in using neat amorphous active pharmaceutical ingredients in everyday tablets and capsules [1]. The conversion of an amorphous form to the crystalline state either during storage or drug dissolution constitutes physical instability of amorphous drugs, and it impedes the solubility advantages that they provide. To elucidate the mechanisms behind physical instability, we have recently studied the relaxations of amorphous drug molecules and confirmed that amorphous drugs, like most amorphous materials, do have a secondary relaxation, the so-called β-relaxation [2, 3]. This relaxation dictates the mobility of the drug molecules when stored below their primary glass transition temperature, and amorphous drugs become physically stable when stored below the β-relaxation temperature [2]. This temperature, however, can be very low, and thus makes stabilization of neat amorphous drugs practically difficult in most cases [2]. Based on the fundamental β-relaxation phenomenon underpinning physical instability, it is obvious neat amorphous drugs need to be stabilized, using e.g. polymers, coamorphization, or porous materials, for practical pharmaceutical use. Stabilization of amorphous drugs using polymeric glass solutions (also called amorphous solid dispersions) is more often attempted, and usually based on the thermodynamic solubility of the drug in the polymer [4]. Stabilization using coamorphization is an alternative to the use of polymers and is based on interactions between drug and low molecular weight excipient molecules and thus a hindrance to molecular mobility [5, 6]. Porous inorganic materials, however, can also stabilize amorphous drugs by interaction and spatial confinement [7, 8].

It is generally assumed that it is advantageous if the excipient remains amorphous to avoid inducing recrystallization of the drug. However, we found that for mesoporous silica amorphous drug formulations, hydrogen bonding between the interacting functional group and the silica surface forms strong hydrogen bonding similar to those found in their respective crystalline drug [8]. This is interesting since it shows that the excipient intended for stabilization does not necessarily need to be amorphous and widens the scope of materials that can be used for stabilization. In an attempt to find new materials for stabilization of amorphous drugs, we have investigated the amorphization, physical stability and in vitro drug release of the model drug carvedilol when co-milled with functionalised calcium carbonate (Omyapharm® 500-OG).

For amorphization kinetics, the starting materials functionalised calcium carbonate (FCC) and carvedilol (CAR), and physical mixtures of 50% (w/w) of CAR and FCC (50% CAR) were milled for 90 min. Sampling was performed at 10, 20, 30, 60 and 90 min of milling and the samples were subjected to X-ray powder diffraction analysis (XRPD). The diffractogram of FCC showed no peaks at the low angle (5-22° (2θ)) however, crystalline peaks are present at high angles, and after 90 min of milling the crystalline peaks are still present. In contrast, carvedilol required between 10-20 min of milling to become amorphous.

To investigate the physical stability of the co-milled samples, different drug ratios, 10-80% CAR, were again prepared by milling for 30 min and analysed by DSC and XRPD. The DSC analysis of the mixtures at various drug ratios showed a glass transition temperature at 38 °C, which is similar to that of amorphous CAR (Fig. 2). It was observed that drug ratios from 30% CAR and below did not show a melting endotherm indicating that at stress conditions, 10-30% drug can be stabilized in the CAR-FCC mixtures. Under dry storage conditions at room temperature, it was observed that CAR-FCC samples containing 50-60% CAR recrystallized within a week, samples containing 40% CAR recrystallized after 11 weeks, and samples containing 10-30% CAR were stable for the testing period of 40 weeks. 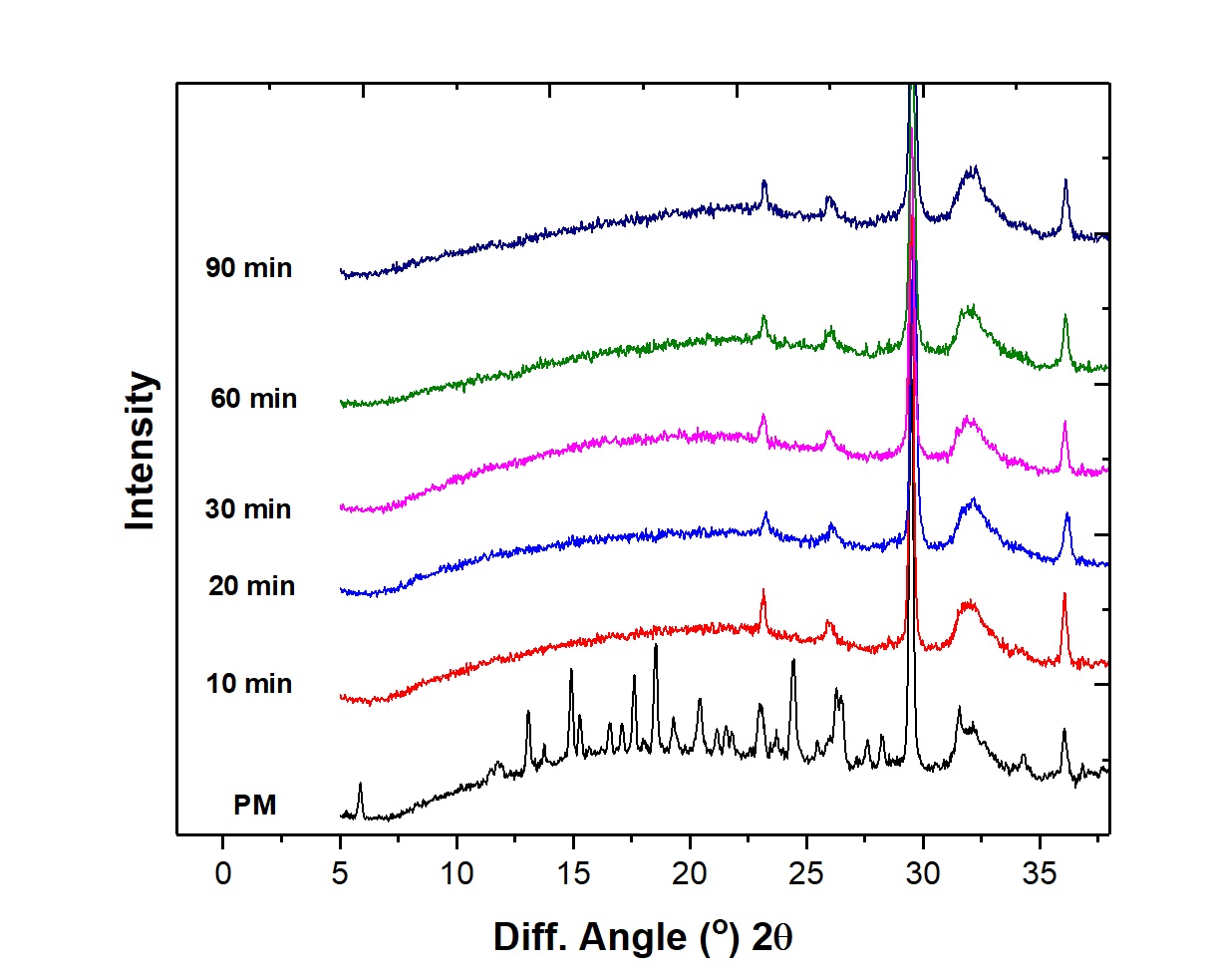 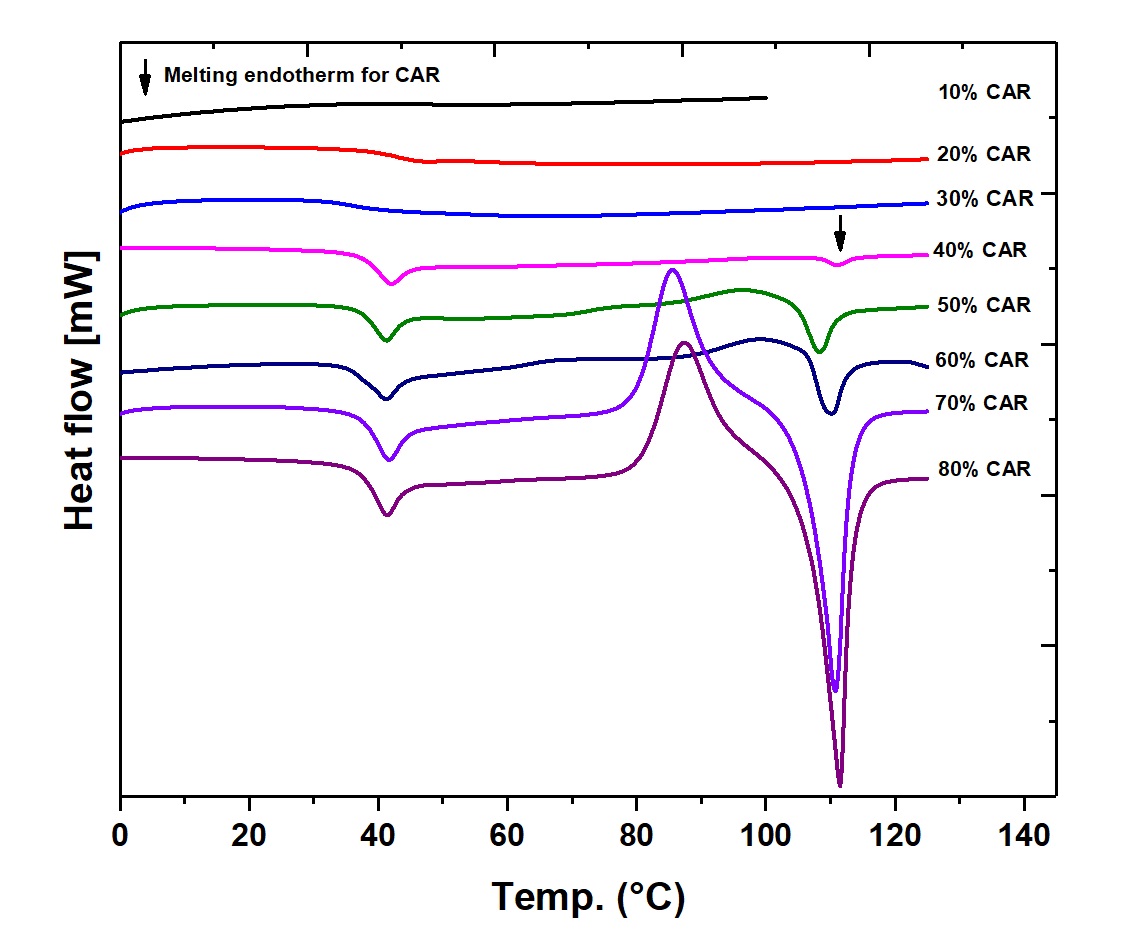 In vitro drug release showed that samples containing 60 and 80% CAR did not significantly improve the release of CAR compared to either the neat amorphous or crystalline CAR. Samples containing 50% CAR did improve the drug release but showed extensive drug precipitation from the supersaturated solution as of about 60 min into the dissolution study. However, samples with 20-40% CAR showed about 3-fold increase is solubility compared to the neat forms of the drug at a dissolution time of 20 min and maintained supersaturation even after 360 min of dissolution testing (Fig.3).

In summary, co-milling FCC and CAR produced amorphous carvedilol. CAR-FCC samples containing 30% CAR and below were physically stable at dry storage conditions. The maximum drug load was found to be between 30-40% CAR. Improved drug release was observed for these systems. 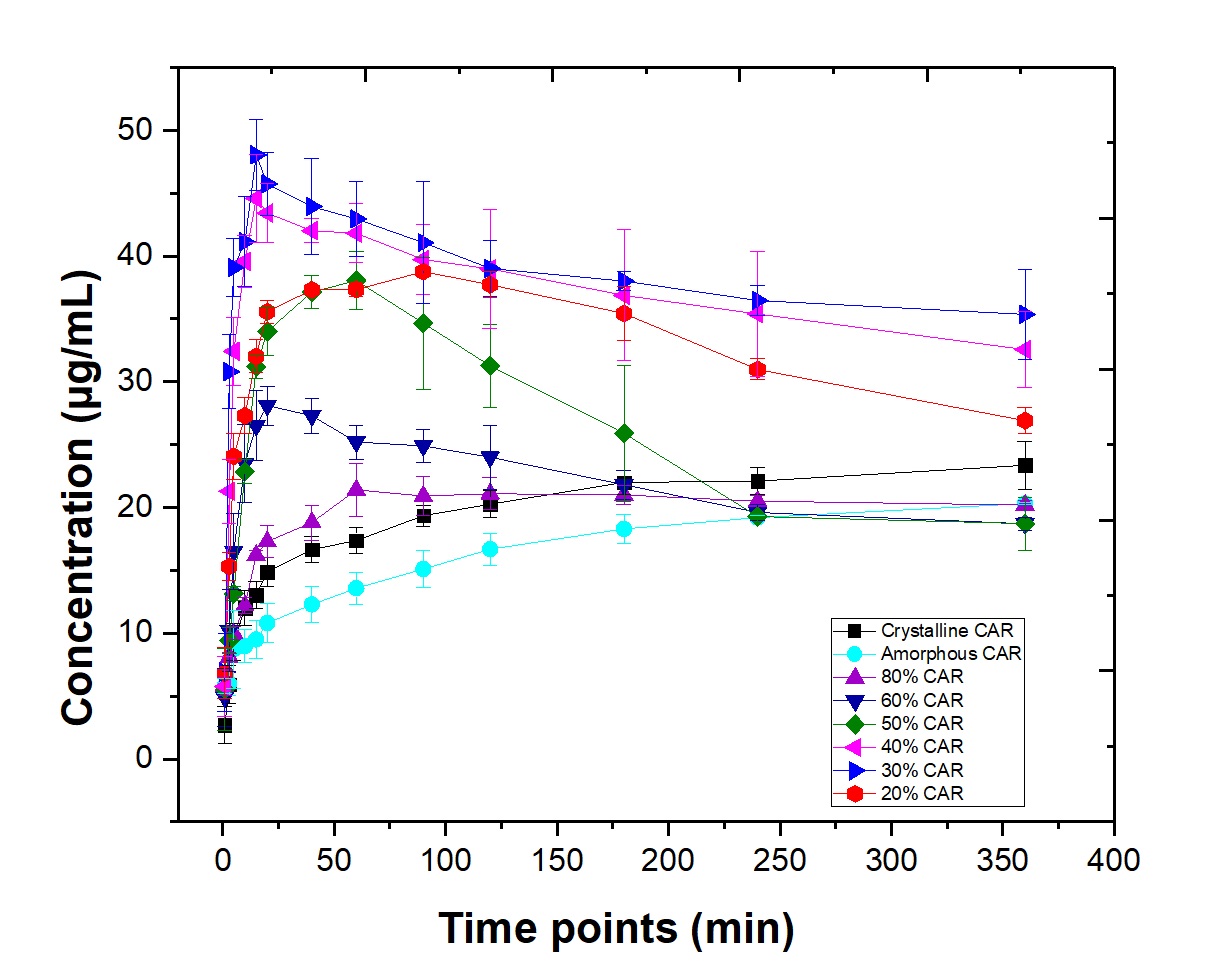 Figure 3: In vitro drug release of crystalline and amorphous CAR and CAR-FCC samples

From this study, FCC improved the amorphization time, produced physically stable CAR-FCC formulations, improved dissolution and maintained supersaturation. This is indeed an all-round promising performance and leaves us with the question: should crystalline inorganic excipients be investigated more extensively to stabilize amorphous forms of drugs?

Read the full version of the article here

For question and inputs contact Eric This email address is being protected from spambots. You need JavaScript enabled to view it.

Check out this commented presentation by Anne Linnet Skelbæk-Pedersen

Here's a commented presentation from Jerneij Stukelj from the University of Helsinki, Finland.

Pharmaceutics (ISSN 1999-4923, click here) is an open access journal which provides an advanced forum for the science and technology of pharmaceutics and biopharmaceutics. It publishes reviews, regular research papers and communications. Covered topics include drug delivery and controlled release; pharmaceutical technology, manufacturing and devices; physical pharmacy and formulation; nanomedicine and nanotechnology; pharmacokinetics and pharmacodynamics; biopharmaceutics; drug targeting and design; gene and cell therapy; biologics and biosimilars; clinical pharmaceutics. Pharmaceutics is indexed by SCIE (IF 4.773, ranks 26/267 (Q1) in the category of Pharmacology & Pharmacy), PubMed and Scopus; it also is a member of DOAJ.

The benefits for PSSRC members are as follows:

One of the biggest problems in the manufacturing of high-quality low-dose inhalation products, is dose uniformity of filled capsules [1]. Our approach towards a scientific qualification of dosator nozzles for low-fill weight (1–45 mg) capsule filling comprises a decoupling of the filling process in dynamic and static mode tests, whereas the latter was carried out using a novel filling system, i.e. stand-alone static test tool, developed by us. 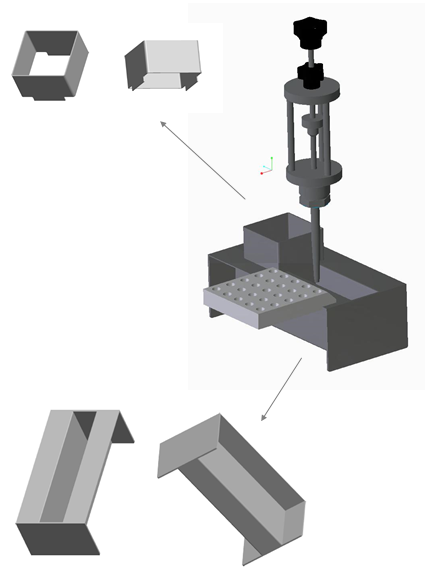 The potential of amorphous solid dispersions to improve the solubility, dissolution rate and bioavailability of poorly water soluble drugs is well known. However, the number of formulations that have made it through to the market is limited because of the unstable nature of the amorphous form, which often results in recrystallization of the drug with the subsequent loss of the solubility and dissolution advantages. Thus, ensuring the stability constitutes a major challenge in the development of amorphous solid dispersions.