This study assessed the effect of the PVP K30 binder (5 %) addition method (wet or dry) as well as the addition of a surfactant (SLS; 0.2 %) on a formulation containing 50 % mebendazole, a poorly soluble, poorly wettable API. The filler consisted of lactose and microcrystalline cellulose in a 1:1 ratio. The design of experiments was set up by combining four replicate center composite circumscribed (CCC) designs, each varying L/S ratio and screw speed within a formulation. Subsequently, the effect on critical granule quality attributes (particle size, shape and friability) was evaluated.

Compared to previous research, in which HPMC E15 LV was used as binder to granulate 50 % mebendazole, significantly stronger granules were obtained in this study at similar to lower L/S ratios (Portier et al., 2020). Using HPMC as dry binder, the lowest friability of 21% was reached at a L/S ratio of 0.31, whereas all PVP formulations yielded granules with a friability lower than 10 %. This indicated that PVP is a more effective binder for the granulation of poorly soluble APIs at high drug loads, due to its lower viscosity and better wetting characteristics than HPMC E15 LV (Rowe et al., 2009).

Addition of a surfactant as well as wet binder addition of PVP significantly reduced the amount of liquid required to achieve similar granule characteristics, as illustrated in Table 1 for four runs at identical screw speed. Despite the similar particle size-related measures, 10 - 15 % higher friability was observed for the PVP dry formulation due to the lower wetting properties, resulting in the weakest granules despite the highest L/S ratio. The most significant L/S reduction (± 20 %) was achieved by adding SLS to the granulation liquid as this improved the wetting properties of the aqueous phase. Changing the binder addition method from dry to wet reduced the required L/S ratio by - 8 %, probably due to a better activation of the binder and more homogeneous distribution of the activated binder. 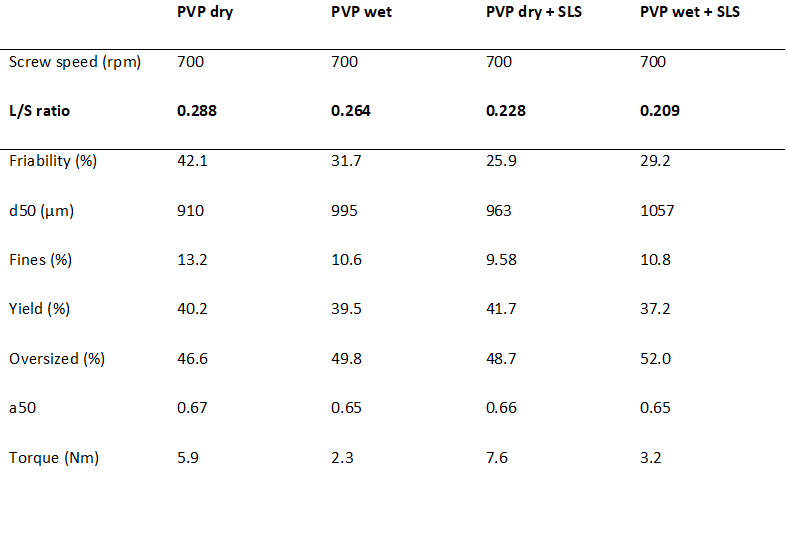 Overall, L/S ratio had the largest effect on granule quality attributes whereas the effect of screw speed was negligible. Considering the formulation variables, it was demonstrated that addition of a surfactant and wet binder addition clearly decreased granule friability and reduced the amount of fines, correlating with the lower L/S ratios required for the respective formulations to obtain granules of a specific size. However, granules with similar high quality could be obtained for all formulations, as shown in Figure 1. Additionally, a clear correlation between granule size and friability was observed, indicating that the strength of similar size granules was comparable between different formulations. This implies that, from a practical perspective, the binder addition method and surfactant mostly impacted the required L/S ratio, but only to a limited extent the achievable granule quality in terms of friability and granule size. 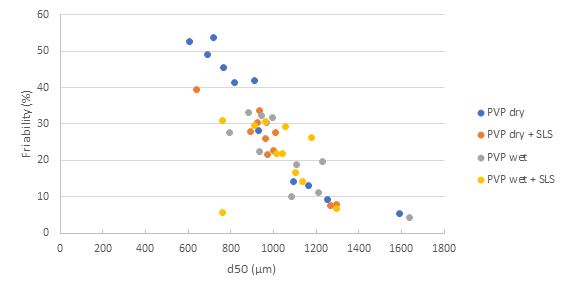 Compared to the previously studied formulation, using HPMC as binder, all four formulations with PVP yielded significantly stronger granules at similar to significantly lower liquid to solid (L/S) ratios. Current research demonstrated the dominant impact of the L/S ratio on granule quality attributes whereas the effect of screw speed was irrelevant in this study. A clear beneficial effect of using PVP instead of HPMC was found on granule strength. Although similar granule quality characteristics could be obtained for all formulations, it was clear that addition of SLS or wet binder addition allowed to reduce the required L/S ratio by 20 % and 8 %, respectively. This significant reduction could be useful for other formulations requiring high amounts of moisture, which could otherwise not be dried at a high throughput due to the limited drying capacity of the dryer unit of the Consigma system.

The full version of this research article can be consulted at https://www.sciencedirect.com/science/article/pii/S0378517320300521.

This work was supported by Janssen Pharmaceutica and the agency Flanders Innovation and Entrepreneurship (IWT project n° 145059). PVP was kindly provided by BASF.