The over the past decades emerging problem of poor aqueous drug solubility and dissolution rate of marketed drugs and new chemical entities (BCS Class II (and IV)), resulting in low and erratic bioavailability, urged pharmaceutical companies to develop innovative technologies to tackle this hurdle 1. Amongst these technologies, the molecular dispersion of these chemical entities in inert polymers (“carriers”) has proven to be a very promising one. Although mainly solvent- (e.g. spray-drying) and heat-based (e.g. hot-melt extrusion) approaches are well established processes within the pharmaceutical industry, a gaining interest in mechanochemical activation methods to produce amorphous solid dispersions (ASD) has recently been noticed. The lack of solvent and operation at reduced temperature(s) (-196°C) are believed to be on the basis of this trend. Nevertheless, the mechanisms laying on the basis of cryogenic milling processes to manufacture ASDs are still poorly characterized and several hypotheses, of which the most probable one is depicted in Figure 1, have been formulated 2. Hence, further in-depth assessment of this technique is highly desirable. 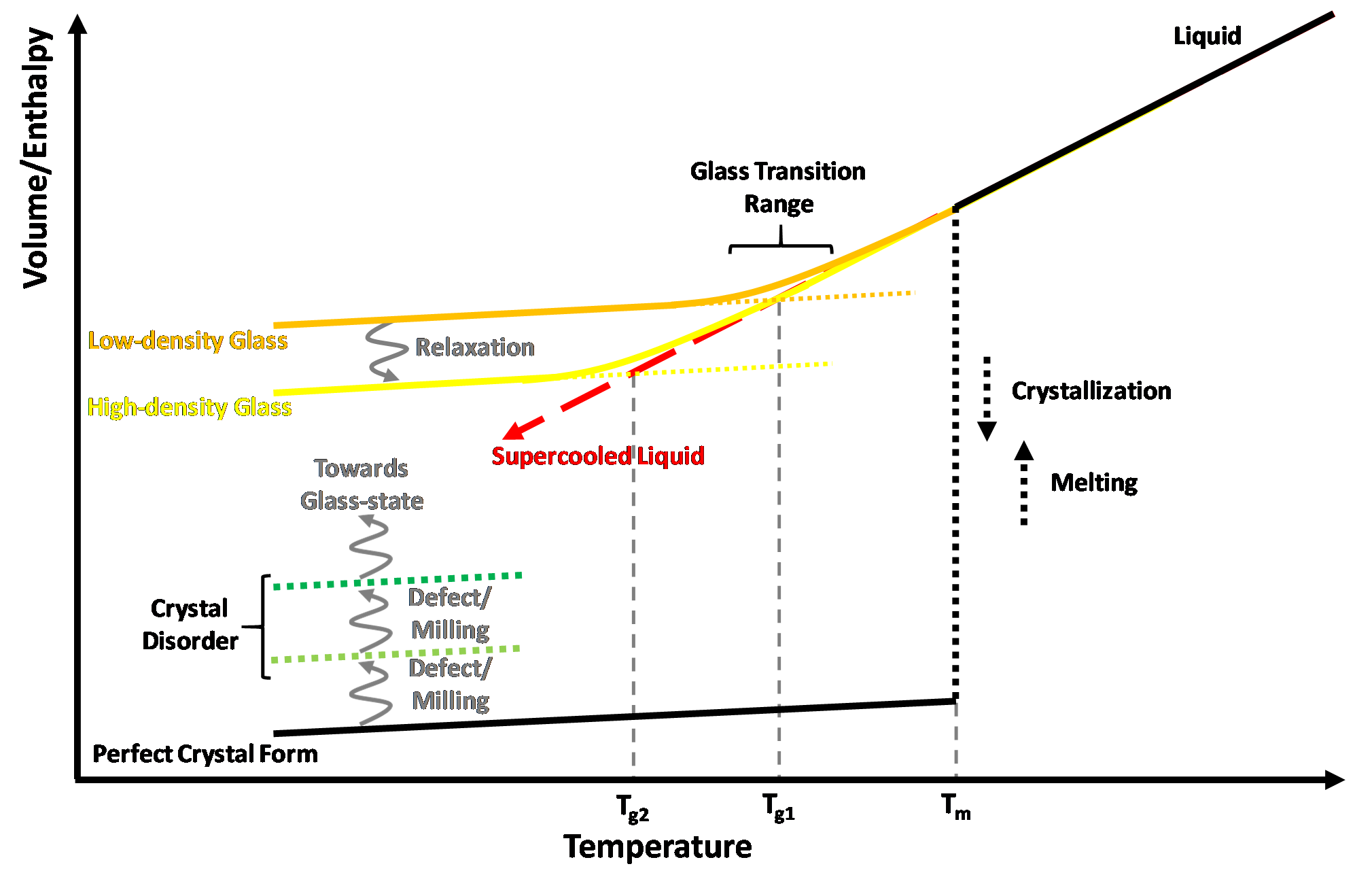 Figure 1: Volume/Enthalphy-Temperature diagram of glass- and crystal-forming species from the liquid melt. Depending on the cooling rate, a higher or lower density glass with respectively a lower (Tg2) or higher (Tg1) glass transition temperature can be formed from the melt (amorphization in the traditional sense). In case of slow-enough cooling, crystallization to a specific polymorph will be induced at the melting point (Tm) with the most stable polymorph having the lowest energetic state in the diagram. Overlaid on the diagram, the potential influence of milling-induced changes (crystallite size reduction, altering molecular mobility, and increase in defect density) effecting the Gibbs energy of a system. (Partially adapted from Luisi et al., 2012 3).

ASD-manufacturing by means of cryogenic grinding

Drug and polymer were concomitantly milled, at reduced temperature (applying liquid nitrogen – -196 °C) in an oscillatory cryomill from Retsch GmBH (Haan, Germany). Both milling jars (5 mL) and beads (3 x 10 mm) were composed of stainless steel. The oscillatory frequency, milling time and loaded quantity of sample were fixed for all experiments at 25 Hz, 3 h and 200 mg respectively. To prevent overheating, the 3 h interval of milling was divided into six shorter intervals of 30 min at 25 Hz which were alternated with 5 min of oscillation at 5 Hz. In parallel, 200 mg aliquots of the pristine drug, quench-cooled indomethacin and polymers were also exposed to the same cryogenic milling process.

Physically spoken, based on the thermal behaviour and XRPD-analysis of the produced samples, it was possible to manufacture fully amorphous ASDs when applying the above described protocol. Nevertheless, in case smaller sized beads or less beads were used during cryogenic grinding, samples could not be fully amorphized and suffered from residual crystallinity which appeared to be highly variable. This observed high variability in residual crystallinity, if present, raises questions on the powder homogeneity and the reproducibility of the obtained fully amorphous ASDs by means of cryogenic milling. The origin of this high variability was later found to be inherent to the cryomill itself as both inter- and intra-jar variability were high (depending on the jar position) (see Figure 2).

Figure 2: Investigation of the inter- and intra-jar variability of the four 5 mL jars that can be used simultaneously in a Retch cryomill system. Experiments were performed for systems containing indomethacin and BSA with either 20 % DL and 1 x 7 mm bead or either 30 % DL and 1 x 10 mm bead. It was observed that the standard deviation on results increased as the radius increased.

Next to being a highly variable system, allegations of drug decomposition were found during the in-vitro evaluation of ASDs produced by cryomilling since extra signals popped up during HPLC-analysis (see Figure 3 – example of naproxen) and because the ASDs tended to perform worse than the crystalline drug as such in terms of dissolution which was counterintuitive. Later drug-assay of these ASDs confirmed drug-contents of these manufactured ASDs to be significantly lower than 100 % whilst cryomilling without polymer left the drug intact (see Table 1 – examples of indomethacin). When in-vitro drug-release testing was scaled for assay, all of the ASDs were found to outperform their crystalline counterparts and to create supersaturated systems. 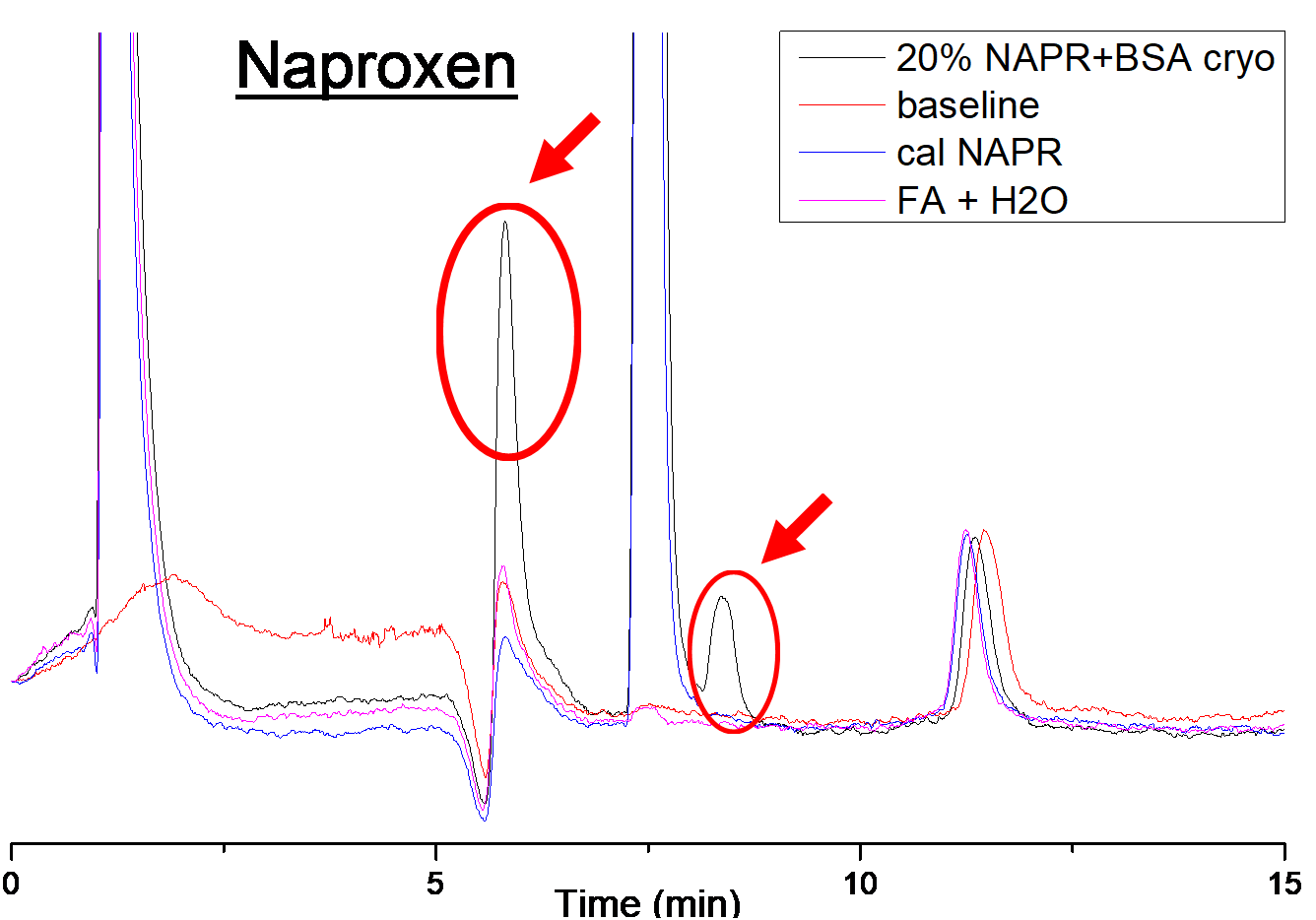 As been mentioned in the physical evaluation part, chemical instability of the selected drug(s) was observed during manufacturing (Table 1 – reduced assay). Further research, however, could not attribute this observation solely to the amorphous (and hence higher chemical reactive) state of the drug(s)  being  formed  and  further  processed.  Even  cryomilling  (partially) amorphized (> 65 %) indomethacin for three hours did not show any significant decomposition of the drug during the cryogenic milling process (see Table 2).

Despite no degradation was observed after cryomilling indomethacin as such (even when made largely amorphous before milling), the fact that presence of polymers, normally part of the system to stabilize manufactured ASD-systems against (re-)crystallization, can actually result in significant chemical decomposition of drugs was striking as the same energy input can be assumed for the same operating conditions. However, it might be erroneous to equate chemical degradation during mechanochemical activation with thermally activated “reactions”.

As stated by Adrjanowicz et al., milling devices must always be treated as “chemical reactors” in which mechanically provoked chemical processes (such as decomposition) can take place under favourable conditions 4. It is also noteworthy that mechanochemical reactions, such as e.g. degradation, might require a substantially lower activation energy (Ea) compared to reactions taking place thermochemically. The example of iron oxide creation from iron and oxygen by both mechanisms nicely illustrates this difference in activation energy needed as thermochemically an Ea of 54 kJ/mol was found whilst mechanochemically this is only 0.7 kJ/mol 4,5. As a result, it is highly unlikely that localized heating of parts of the sample during cryomilling can be held responsible for degradation of the drug. Nevertheless, this does not yet disclose how the addition of polymers during milling can result in accelerated chemical degradation. One held believe is that drug-polymer hydrogen bond formation (drug-polymer interactions) might be held responsible which is in strong contrast with its reason of addition (physical stabilization). Data from Adrjanowicz et al. with furosemide and PVP or inulin, revealed high suspicion of the promotion of proton migration across hydrogen bonds in interacting systems boosting chemical degradation whilst this was not observed in non-hydrogen bond forming systems resulting in improved chemical stability 4. This finding can be invigorated by the findings of Šagud et al., who found that different degradation products of praziquantel are formed depending on the polymer present (PVP or crospovidone) 6. Hence, the Ea for mechanochemical decomposition in presence of (interacting) polymers can be considered lower and thus more likely to happen in the same process (see Figure 4). Of course, when an amorphous drug is concerned, intuitively all Ea’s will be lower due to their higher free energy. 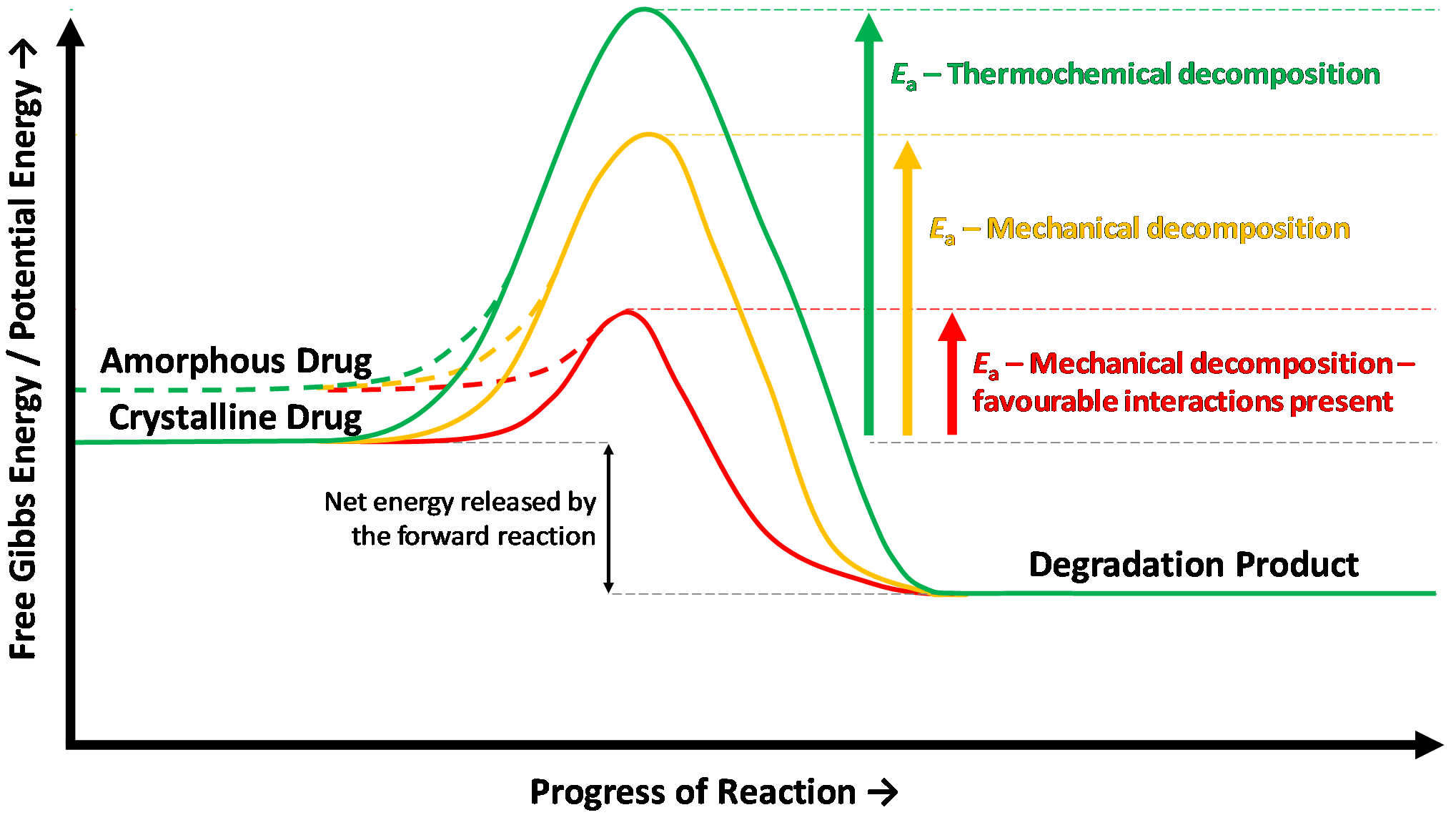 Figure 4: Scheme of difference in activation energy (Ea) of thermochemical and mechanical reactions (/decomposition). Polymers (pristine and decomposed) might induce favorable interactions that might facilitate (decrease Ea) the reaction speed. Amorphous compounds (higher free energy) on the other hand are more reactive than their crystalline counterparts (lower free energy). Based on own findings as those of Adrjanowicz et al. and Czeslaw and Kan’ichi 4,5.

Nevertheless, further in-depth investigation of the polymers demon-strated cryogenic milling to induce polymer chain scissions next to API-degradation (see Figure 5 and 6). It was observed that the evaluated polymers experienced a more than three-fold reduction in MW within the first three cycles of cryomilling, hitting a plateau after approximately 90 min of cryogenic milling with no or limited progression of further MW reduction with further increased duration of milling. This is indicative for a lower molecular weight degradation limit M∞ being reached below which minimal chain scission occurs for the applied energy input and milling conditions 7-9. Hence, the observed mechanodegradation process of these polymers can be described as a first order chemical reaction, where the concentrations are replaced with polymer chain lengths (see equation 1) 7-9

Here a is a constant, k is the degradation rate constant and tm is the milling time. By fitting the data presented in Figure 6 to Eq. 1, values for M∞, k and a can be determined for all polymers (see Table 3). 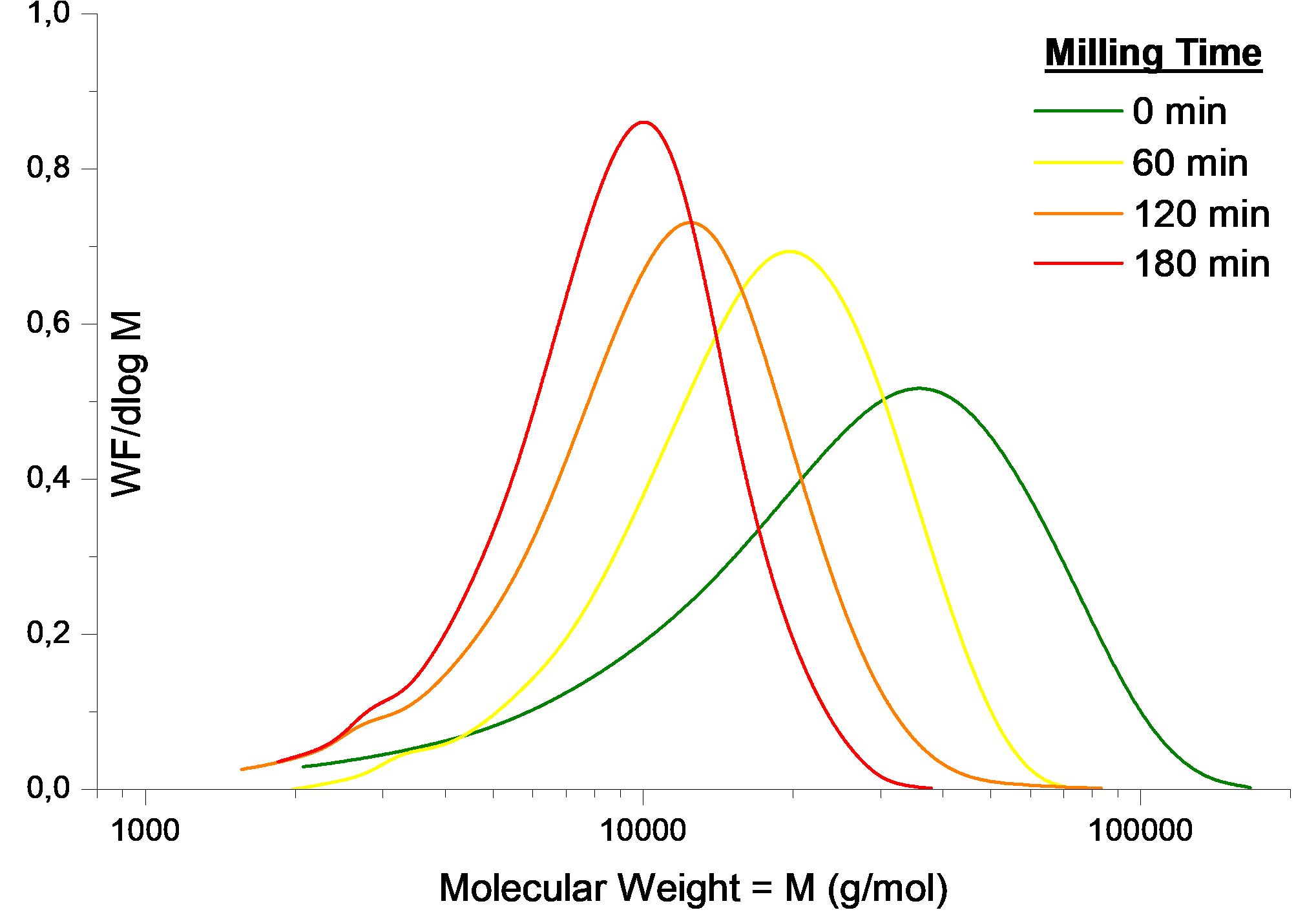 Figure 5: Molecular weight distributions of HPMC at 60 min intervals as an example of the gradual shift towards lower molecular weights for longer cryomilling times. 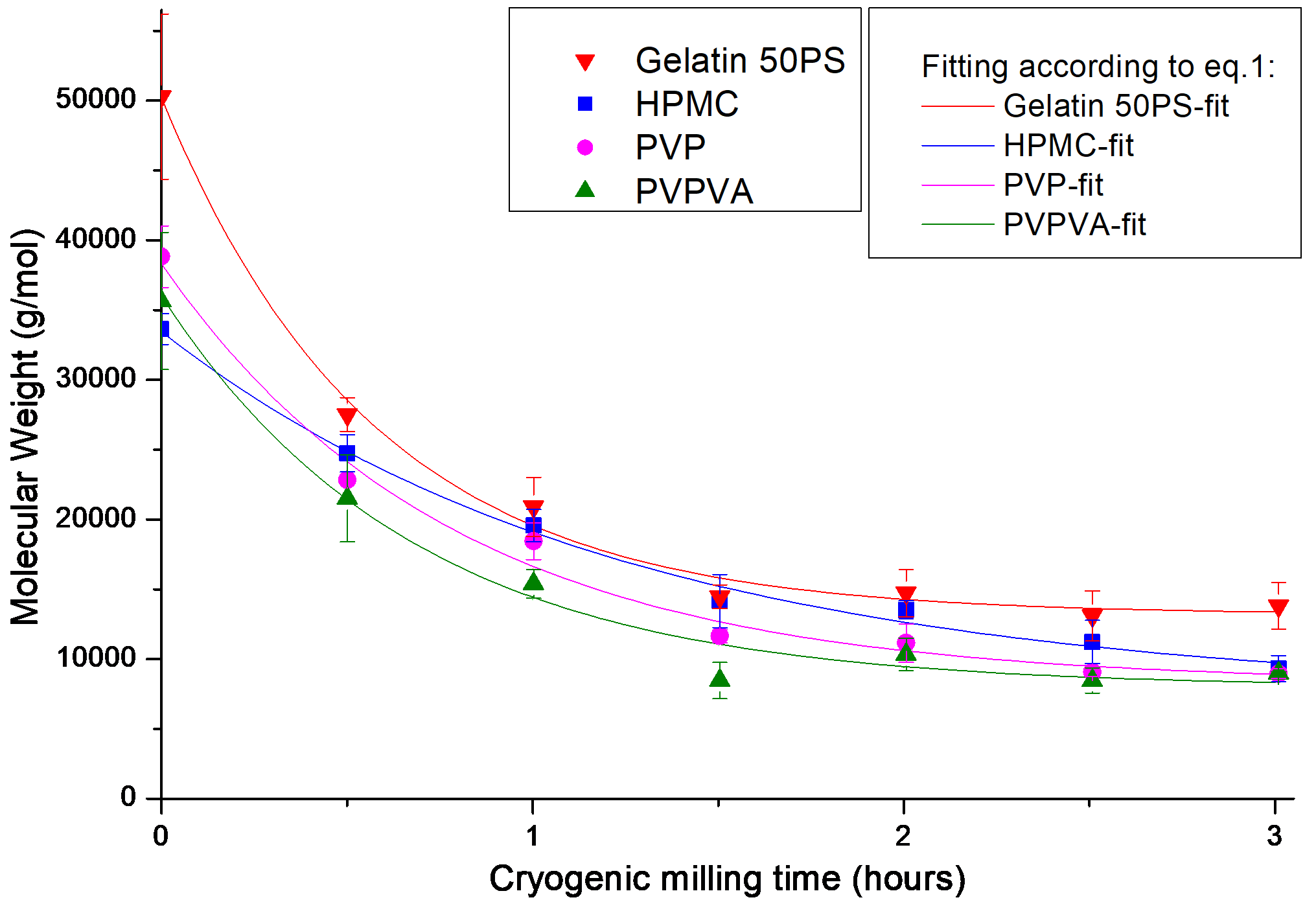 Hence, next to the favourable interactions hypothesis, reactive processes (radicular, ...) between the drug(s) and “decomposed” polymer(s) cannot be excluded at this moment. These observations, as a result, are in demand of further in-depth investigation.

Moreover, in case proteins (biopolymers) like gelatin 50PS or BSA instead of (semi-)synthetic polymers are concerned as carriers for ASDs, fragmentation, agglomeration, denaturation, etc. were noted.

In the end, based on available literature and our own observations, a mechanistic insight of involved complex factors in the cryomilling process was stipulated and is provided in Figure 7. 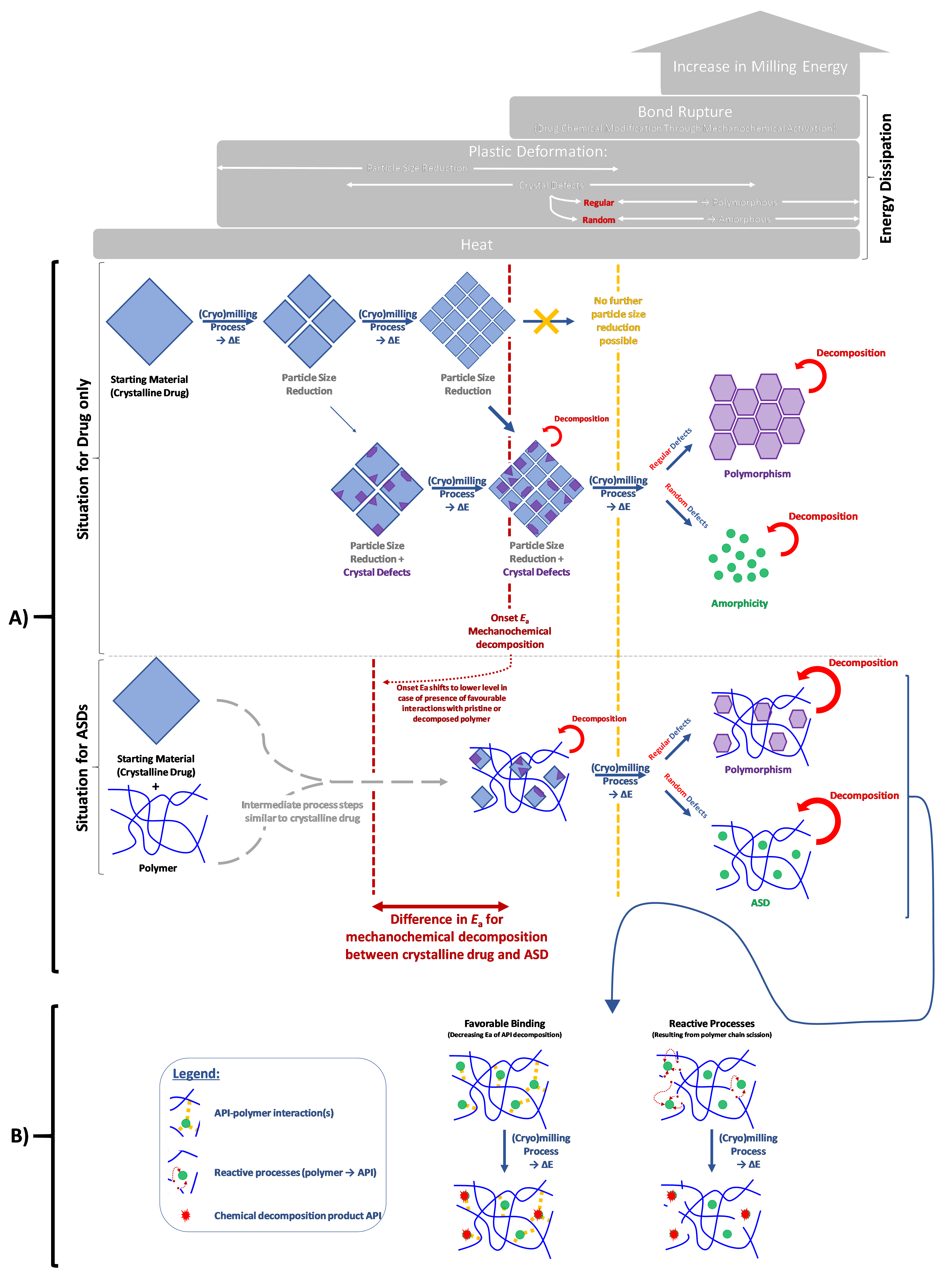 Figure 7: A) Schematic representation of the hypothesized complex interplay of energy dissipation during cryomilling as heat, plastic deformation (particle size reduction and particle size defect eventually resulting in polymorphism (regular) or amorphicity (random)) and bond rupture (drug chemical modification through mechanochemical activation). Concomitant occurrence of all these processes is possible in case of favorable circumstances and it is observed that the activation energy (Ea) of mechanochemical decomposition shifts to a lower plateau in case (interacting) polymers (both intact as decomposed) are present. (Partially based on Adrjanowicz et al. and Lamartino and Mercuri 4,10) B) Hypothesis of polymer assisted chemical decomposition of API upon cryomilling: 1) favorable interactions between API and polymer(s) playing a role as already observed in literature 4 or 2) polymer chain scission, as observed in this manuscript, possibly resulting in reactive processes between decomposed polymer and drug being responsible for API degradation.

The in this work provided physical and chemical evaluation of cryogenic milling to manufacture ASDs supports novel mechanistic insights in the cryomilling process. Physically spoken it was possible to produce ASDs. Nevertheless, cryomilling was observed to be highly variable in terms of residual crystallinity which might also be indicative for other inhomogeneities within the ASDs. Chemically, on the other hand, both API and polymer chemical decomposition were demonstrated of which degradation of the API was more pronounced in presence of polymer(s).

As a result, mechanochemical activation process(es) for amorphization and ASD-manufacturing cannot be regarded as a mild technique/process, as generally put forward, and one needs to be aware of chemical degradation of both API and polymer.

Read 8207 times
More in this category: « Influence of the Suspension Composition on the Mechanical Strength of Dried Microspheres Machine-Vision-Enabled Salt Dissolution Analysis »
back to top