The potential of amorphous solid dispersions to improve the solubility, dissolution rate and bioavailability of poorly water soluble drugs is well known. However, the number of formulations that have made it through to the market is limited because of the unstable nature of the amorphous form, which often results in recrystallization of the drug with the subsequent loss of the solubility and dissolution advantages. Thus, ensuring the stability constitutes a major challenge in the development of amorphous solid dispersions.

The thermodynamic stability of a solid amorphous dispersion can only be ensured by molecularly dispersing (dissolving) the drug in the polymer below its saturation solubility. Therefore, the prediction of drug-polymer solubility at room temperature is of great academic and industrial interest. By assuming that a drug behaves as a solvent for an amorphous polymer it is possible to describe the solubility of a drug in a polymer using the Flory-Huggins model:

where \(\Delta H_m\) and \(T_m\) are the enthalpy of fusion and melting temperature for the pure drug respectively, \(R\) is the gas constant, \(\lambda\) is the molar volume ratio of the polymer to the drug, \(\chi\) is the Flory-Huggins interaction parameter. \(T\) is the temperature at which the measurement is made and \(\nu_{\text{drug}}\) is the volume fraction of the drug in the polymer.

However, as the majority of pharmaceutically relevant drugs and polymers are solid, measuring the equilibrium solubility at room temperature is unfeasible. Therefore, several differential scanning calorimetry (DSC) protocols have been proposed based on determination of equilibrium thermodynamics at elevated temperature [1]. In a recently proposed protocol, referred to as the recrystallization method, a supersaturated amorphous solid dispersion is annealed at different temperatures above its glass transition temperature (\(T_g\)) to recrystallize excess drug and reach equilibrium solubility. The solubility after annealing is then derived from the \(T_g\) of the annealed material using the Gordon-Taylor equation and extrapolated using the Flory-Huggins model to predict the solubility at room temperature [2]. Other noteworthy approaches include the melting point depression method [3] and an estimation based on the solubility in a liquid low molecular weight analogue of the polymer [4].

In order to assess the confidence of a prediction it is important to realize which variable is subject to experimental noise. Using the recrystallization method, the temperature (\(T\)) is the variable under control and can be regarded as free of error whereas the volume fraction of the drug (\(\nu_{\text{drug}}\)) is subject to error. The optimal estimate for the Flory-Huggins interaction parameter (\(\chi\)) is thus found by minimizing the sum of squares of the residuals between the observed and predicted \(\nu_{\text{drug}}\). Consequently, the confidence of the prediction is expressed as a 95% prediction interval that is dependent on both the inter-replicate variance (reproducibility) and intra-replicate variance (fit to the Flory-Huggins model) [1].

The introduction of a formal statistical analysis method enables a comparison of different solubility predictions. In the original method, a milling procedure was used to prepare the supersaturated amorphous solid dispersion [2]. However, as the physical properties and recrystallization behavior of an amorphous material have been reported to be affected by the preparation technique [5], the influence of different preparation techniques (ball milling, spray drying and film casting) on the solubility prediction was investigated [6].

As can be seen in Figure 1, the predicted solubility from the ball milling method is not consistent with those predicted from spray drying and film casting methods, indicating fundamental differences between the three preparation techniques. The most narrow prediction interval was found for spray drying, indicating a combination of a good fit to the Flory-Huggins model and reproducibility of the measurements. The prediction interval for ball milling was wider than that for spray drying, but still relatively narrow. However, as ball milling provided the best reproducibility of the three techniques, the broader prediction interval was a result of a poor fit to the model. In contrast, the broad prediction interval for film casting was a consequence of a poorer reproducibility than for the other two techniques. As previous studies suggest that amorphous mixtures produced by ball milling may still be heterogeneous at the molecular level, the process involved in reaching the equilibrium solubility is most likely driven by dissolution rather than the intentional recrystallization. Therefore, it is recommended that techniques such as spray drying or potentially film casting should be used to prepare the supersaturated amorphous solid dispersions when using this method [6].

Figure 1: Equilibrium solubility of IMC (\(\chi_{\text{IMC}}\)) in PVP K12 as a function of annealing temperature (Ta). Green diamonds (♦) represent the data from ball milling (a), red circles (●) represents the data from spray drying (b), and blue squares (■) represents the data from film casting (c). The data previously reported by Mahieu et al. (2013) is presented as black crosses (x). The evolution of solubility of the three data sets has been fitted with the Flory-Huggins model (black curves) including the 95% prediction interval (dotted curves). The grey circles (●) represent the experimental relationship between \(T_g\) and \(\chi_{\text{IMC}}\) and the grey curve is the Gordon-Taylor relationship.

Influence of polymer molecular weight on the prediction

One of the most commonly used carriers for amorphous solid dispersions is polyvinylpyrrolidone (PVP). However, despite the widespread use of PVP, the influence of polymer molecular weight (chain length) on drug-polymer solubility has not been sufficiently elucidated. Only a few studies have addressed this issue and none have supported the theoretical considerations and predictions with relevant experimental data [4]. Therefore, the influence of polymer molecular weight on the predicted solubility using spray drying as preparation technique was investigated [7]. 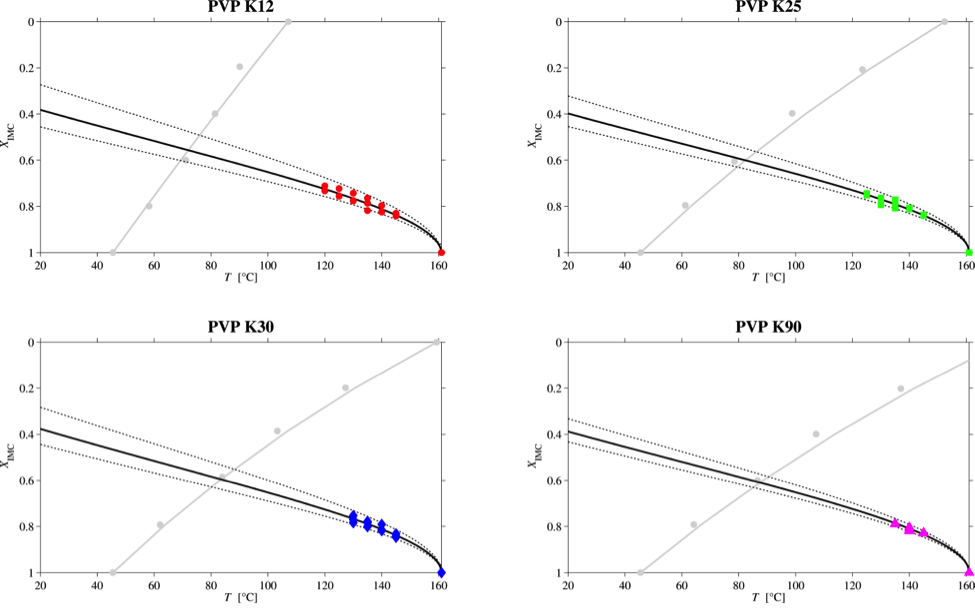 Knowledge about drug-polymer solubility is an important factor in the development of amorphous solid dispersions as it can ensure the thermodynamic stability of the formulation. Previously, the prediction of drug-polymer solubility was based on a central estimate without an assessment of the confidence of the prediction. By introducing a new dimension to the field in form of formal statistical analysis, we enabled the possibility of comparing different solubility predictions. This can be used advantageously to screen for polymers suitable for amorphous solid dispersions.

The research group of Prof. Thomas Rades in Copenhagen focusses on the development of amorphous solid dosage forms including amorphous solid dispersions and co-amorphous formulations. Several methods can be applied to obtain the amorphous form and therefore, the group has extensive knowledge and experience in techniques such as ball milling, spray drying and melt-quenching. In order to assess the stability and physicochemical properties of the formulations, the facilities include XRPD, a range of spectroscopic and microscopic techniques, and state of the art thermal analysis equipment including the DSC, TGA, DMA, and IMC.

Read 36273 times
Tagged under
More in this category: « Downstream processing of a co-amorphous drug-amino acid formulation Does PLGA microparticle swelling control drug release? »
back to top